Get our email!
Search
art, museum 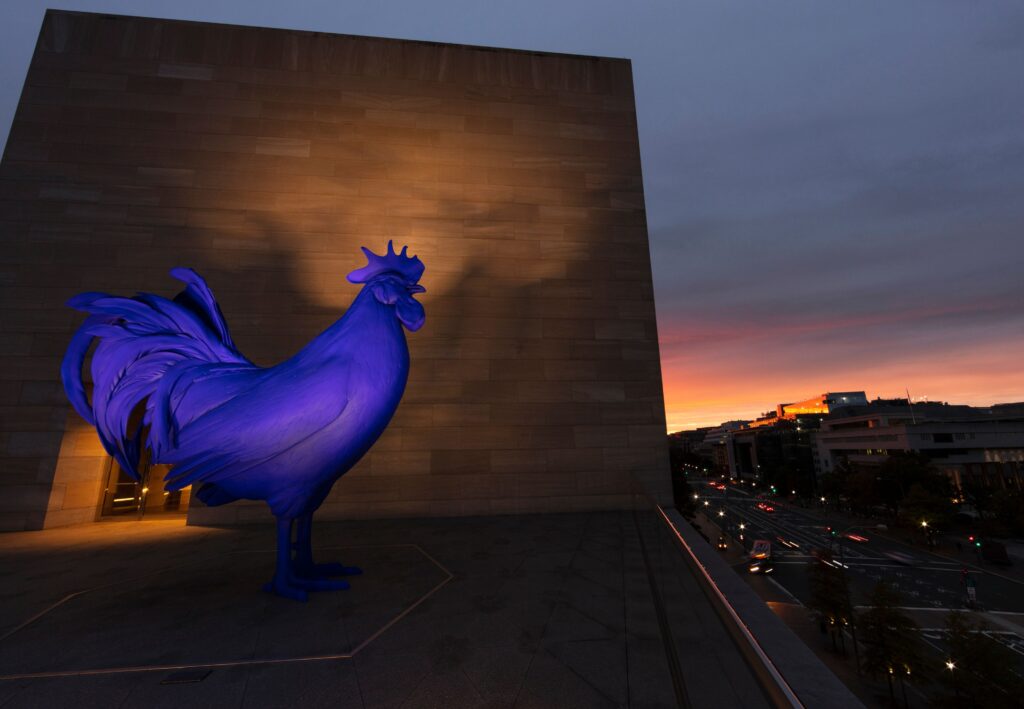 “Katharina Fritsch’ Hahn/Cock (2013) has been given on the National Gallery’s 80th anniversary by the Glenstone Museum to the National Gallery as a symbol of hope and renewal on the horizon. While our East/West Buildings remain closed, beginning tonight the sculpture will be illuminated at night so Washingtonians can see it from afar until they can be reunited for that ‘gram again.”

“A beloved addition to the East Building’s Roof Terrace since it opened in 2016, Katharina Fritsch’s Hahn/Cock (2013) will now call the National Gallery of Art, Washington, its permanent roost. The 14-foot-tall sculpture of a blue rooster, an animal often associated with regeneration, awakening, and strength, has been donated to the nation’s art museum on its 80th anniversary by Glenstone Museum in honor of the resilience of the American people during the COVID-19 pandemic. While the West and East Buildings of the National Gallery remain closed, the work will be illuminated nightly beginning March 17, so Washingtonians can view the sculpture from a distance.

“Hahn/Cock has brought smiles to millions of faces since it first arrived as a loan to the National Gallery’s new sculpture terrace. We are grateful to Mitch and Emily Rales for their generous birthday gift, which will allow visitors to enjoy Katharina Fritsch’s work for years to come,” said Kaywin Feldman, director of the National Gallery of Art. “We look forward to the moment when our visitors and staff can once again commune with their favorite, uplifting blue rooster.”

“Americans have endured unimaginable loss and hardship during the COVID-19 pandemic. We chose to give this very special sculpture to the American people in their honor and as a symbol of the hope and renewal on the horizon,” said Mitchell P. Rales, president of the National Gallery of Art, and Emily Wei Rales, director of Glenstone Museum.

German artist Katharina Fritsch’s Hahn/Cock (2013) was created for the Fourth Plinth series in London’s Trafalgar Square. The sculptural portrait of the domestic cockerel (hahn in German) was modeled after a taxidermy rooster that the artist scanned to make a 3D print, replicated in a monumental scale, and saturated in an ultramarine-blue hue. Made to fill Trafalgar Square’s empty northwestern plinth, the sculpture is a cheeky feminist retort to the 19th-century commemorations of male warriors, including an unrealized sculpture of King William IV for which the plinth was initially constructed.

Following its display in London, Hahn/Cock made its American debut in July 2016 on the East Building’s new Roof Terrace as a long-term loan from Glenstone Museum in Potomac, Maryland, to the National Gallery. On view continuously since, Fritsch’s sculpture is installed directly on the terrace without a pedestal, allowing visitors to view every detail of the rooster from its fluffed tail feathers to the magnificent comb on its head. Alongside other highlights of modern and contemporary sculpture by artists including Nam June Paik and Scott Burton, the rooster stands sentinel facing out over Pennsylvania Avenue, with a view of the Capitol to the east. In April 2020, the work was illuminated, along with the West Building facade and crystals in the 4th Street Plaza, as part of the #LightItBlue campaign to honor the dedication and effort of essential workers, including the National Gallery’s own security and facilities staff.

Fritsch’s sculptures take familiar forms and abstract them by means of scale and color. Matte applications of saturated hues create otherworldly objects whose details are revealed only upon closer inspection. Hahn/Cock is the first work by Fritsch to enter the National Gallery’s collection. A second version of Hahn/Cock made in 2017 is on display at the Walker Art Center’s Minneapolis Sculpture Garden.

Glenstone, a museum of modern and contemporary art, is integrated into nearly 300 acres of gently rolling pasture and unspoiled woodland in Montgomery County, Maryland, less than 15 miles from the heart of Washington, DC. Established by the not-for-profit Glenstone Foundation, the museum opened in 2006 and provides a contemplative, intimate setting for experiencing iconic works of art and architecture within a natural environment.”

Read more →
More Stories
March 16 Coronavirus Data Posted: 42,811“The other half of his body is on the other side of the fence so he is a big one!”