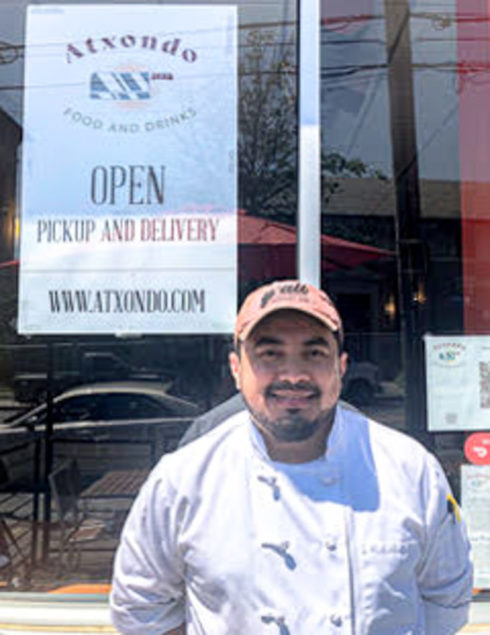 Cassandra Hetherington is a a volunteer for Uptown Main Street. She wrote about Maria Villalta of Pica Taco and Nick Schieber of Jackie Lee’s.

“If you have dined at Estadio, Proof or Asia Nora, you may have already experienced the skills of celebrated Chef Rufino Bautista. If not, it is not too late, because you can now feast on his Spanish-inspired creations at Atxondo (“Achondo”). In early March, after a decade as Executive Chef at Estadio, Rufino moved 2.9 miles north to open Atxondo just days before the world was forced to pause. But this was barely the most challenging thing to ever happen to him; not seeing his father for twelve years was far worse.

Rufino was about four years old when his father journeyed to the United States from impoverished and war-torn El Salvador, leaving behind a wife and nine children. As an adult, he understands his father’s decision. “It is more important to have a father next to me than economic conditions, but I understand and am grateful.” Fortunately, at age sixteen, his whole family was reunited with his father in Washington, D.C. Due to the pandemic, he has been able to spend a lot of time with his own son, and can not imagine being separated from him.

Rufino says he learned a lot from working for great chefs over his 20-year career, in which he has worked his way from Busser to Executive Chef. But a true turning point came during a trip to Atxondo in the north of Spain, where he had a life-changing meal at one of the world’s best restaurants – Asador Etxebarri. The simple ingredients, yet amazing flavors, overwhelmed Rufino so much that he chose to honor this part of Spain as his restaurant’s namesake. Atxondo, the restaurant, is a dream come true for Rufino who imagined being his own boss in the later years of his career. He gazes at the hundred year old abandoned bus barn across the street and is confident that post-renovations, this neighborhood will not be so sleepy. For now, he is grateful for the support he has received from the community. Each satisfied customer motivates and inspires him to push himself further with his cooking. This leafy, quiet for now, portion of 14th Street NW deserves to have something this special in its midst, and now it does.”