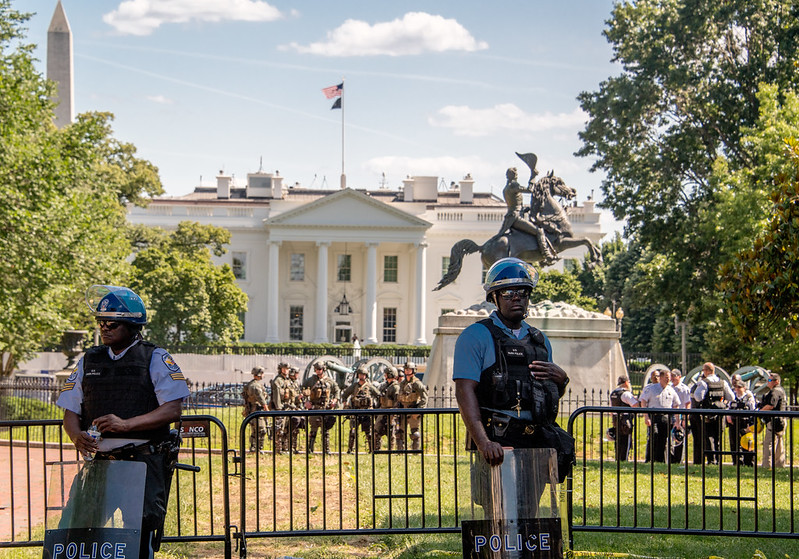 “Congresswoman Eleanor Holmes Norton (D-DC) released the following statement after President Trump’s erratic and violent evening holding a press conference in the Rose Garden while peaceful protesters were being shot with tear gas and rubber bullets nearby. After the press conference, during which his rhetoric became increasingly violent, President Trump went to nearby St. John’s Episcopal Church, which had been damaged by rioting the night before. When he arrived, the President held up a Bible and stood for photos.

“President Trump cemented his image in history as he ordered the use of force against peaceful protesters and then stood on the steps of a historic church in the Nation’s Capital holding a Bible in the air. His stance in front of St. John’s church across from the White House gave the appearance of a provocateur, protected, of course, by police from harmless protestors, who had threatened no one. If he was concerned about the church, why didn’t he ask the rector of St. John’s to stand with him?

Did he think America would see him as a religious figure? Did he foresee that the pictures and surrounding context paint him more accurately as a dictator, suppressing free speech and using the symbols of faith to manipulate his followers?

“We will never know what President Trump was thinking, but we do know this: He ordered violence against peaceful protestors, many of whom were walking with their hands in the air. We know that President Trump stood in front of one of the most historic churches in our city and misused the symbols of faith to make himself look powerful. We know a publicity stunt when we see one.

“The American people saw President Trump for what he actually is: A small man who uses aggression, insults, violence and fear to make himself feel powerful.”