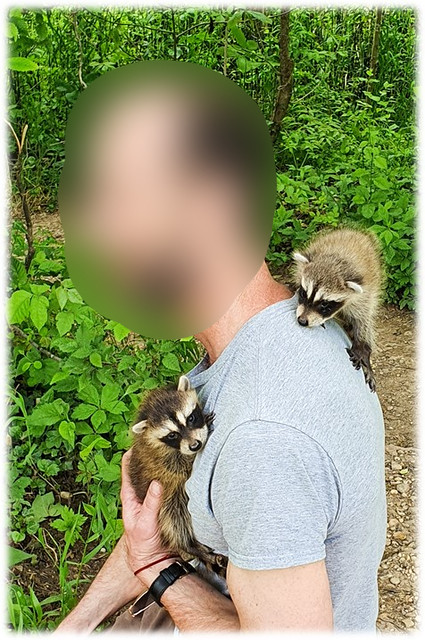 If folks encounter wildlife babies, such as young raccoons or young squirrels, it would be best to leave them alone (unless they are clearly injured). Well meaning individuals sometimes find young animals without a mother and make the mistake of thinking the young ones are orphaned. The mother is probably nearby or out searching for food. The animal’s best chance of survival is with the mother.

My friends encountered this presumably well intentioned individual on the C&O canal path who thought he was rescuing two orphaned raccoons –when in fact he was probably endangering these young ones by taking them from the care of a now frantic mother raccoon. It would be good not to try to care for these animals but to take them to a licensed wildlife rehabilitator. City Wildlife, Second Chance Rescue, Northern Virginia Wildlife Rescue League, and local Animal Control are all resources for finding licensed wildlife rehabilitators and can provide information on how to handle wildlife that appear injured or possibly orphaned. I haven’t even mentioned the rabies concern here or the federal regulations that make it illegal to remove wildlife from National Park Service lands.”