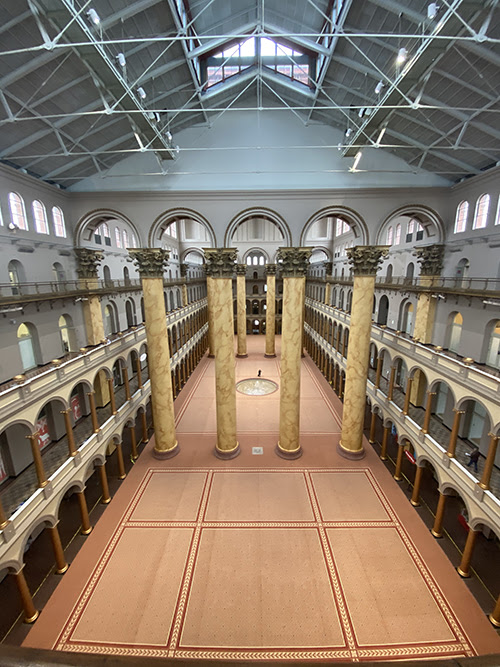 From the National Building Museum:

“On March 13, 2020, the National Building Museum will reopen to the public following the completion of renovations to the historic Great Hall. The three-month-long project involved replacing the concrete floor with a modern foundation and was executed by the U.S. General Services Administration (GSA). A new exhibition, Alan Karchmer: The Architects’ Photographer, will open at the same time, along with popular long-term exhibitions like House & Home and PLAY WORK BUILD.

The reopening marks the beginning of a yearlong 40th anniversary celebration, including a full slate of exhibitions, public programs, and special events. Up first, the Museum presents the Architecture & Design Film Festival: D.C. from March 26 to 29. This is the third annual presentation of the popular series of film screenings and discussions with filmmakers.Just in time for Women’s History Month, the 2020 festival will open with City Dreamers, a film about the contributions of Phyllis Lambert, Blanche Lemco van Ginkel, Cornelia Hahn Oberlander, and Denise Scott Brown–four trailblazers who taught, mentored, and inspired thousands of professionals.

Later this spring, two exhibitions will explore issues of social justice in architecture and design. The first, Justice is Beauty: The Work of MASS Design Group, opens in April and examines the nonprofit architecture firm’s body of work, from schools and hospitals in Rwanda, to a cholera treatment center in Haiti, to the National Memorial for Peace and Justice in Montgomery, Alabama. A separate, ground-floor gallery, which will be free for all to enter, will feature the design firm’s Gun Violence Memorial Project. The second, The Wall | El Muro: What is a Border Wall?, opens in May and will be a timely exploration of the border between the United States and Mexico from the perspective of architecture and design.”

Read more →
More Stories
“What are people doing who have nannies or in nanny shares when it comes to childcare if you have been mandated to telework?”9:30 Club, The Anthem, U Street Music Hall, and Lincoln Theatre events cancelled after tonight “regardless of the size of the gathering” until April 1.