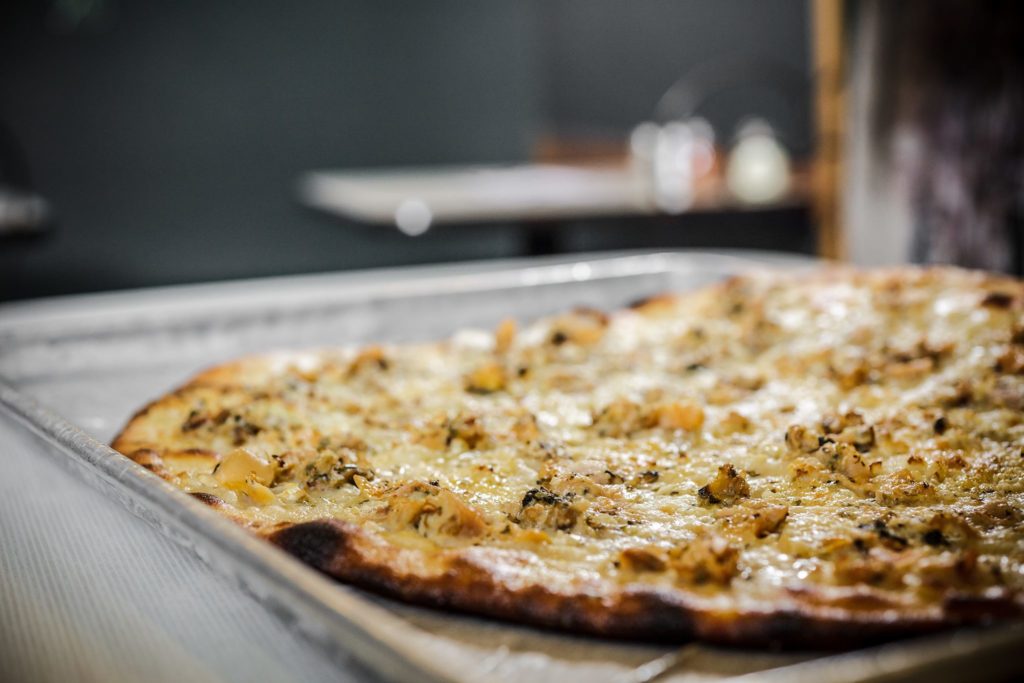 UPDATE: Now hearing they may be coming to Montgomery County. STAY TUNED.

Not a lot to go on but a reader hears that a Frank Pepe Pizzeria Napoletana is coming to D.C. “They have already secured a location. Do you have any additional info?”

Anyone else hearing these rumors? Any idea what neighborhood?

“Frank Pepe Pizzeria Napoletana retains its crown as America’s finest pizzeria. This is a bucket list destination, one you’ll have to make a pilgrimage to if you want to discuss the topic of America’s best pizza with any authority.”

Check out their various locations and menus here. Anyone ever taken a taste?

“Frank Pepe Pizzeria Napoletana was founded in 1925 by Frank Pepe (b. April 15, 1893 d. September 6, 1969). Born in the town of Maiori, on the Amalfi coast, southwest of Naples, Frank Pepe was the quintessential Italian immigrant. Poor and illiterate, he immigrated to the United States in 1909 at age 16 with little more than his health and a strong work ethic. His first job was at a New Haven, CT factory until he returned to fight for his native Italy in World War 1 a few years later.

He married Filomena Volpi, also from Maiori, in 1919. As newly-weds they returned to New Haven, CT in 1920 to begin building their new lives together.

Frank Pepe took a job at a local Wooster Street macaroni manufacturer, Genneroso Muro (the current location of Libby’s Italian Pastry). He then worked for Tony Apicella at his bread bakery, also on Wooster Street.

He made his first entrepreneurial move by establishing his own bakery at 163 Wooster Street — in business today as Frank Pepe’s the Spot — baking his bread and delivering to the local community with a cart. Since he had difficulty documenting, because of his illiteracy, to whom he delivered and to the quantity, he soon abandoned his efforts of delivery service. Instead, he made the fortuitous decision to start a business where his customers would come to him.

Frank & Filomena ,who was a pivotal influence on his success (she was literate and learned to speak and write English), started making a simple and humble product from their homeland, pizza — or as they would say in their Neapolitan dialect, “apizza” (ah-beets). They started off baking two types of pizza, one with tomatoes with grated cheese, garlic, oregano and olive oil and the other with anchovy. The Original Tomato Pie is still offered today and anchovy is still available as a topping. Mozzarella and additional ingredients were to follow.

In the formative years 1925 – 1937, he employed a small crew of relatives that included his half brother Alessio Pepe and his son Mac, cousin Tommy Sicignano, nephews Salvatore and Tony Consiglio. Incidentally, Salvatore Consiglio, after learning pizza baking from his uncle Frank, eventually made the decision to establish his own pizzeria on Wooster Street, the well known Sally’s Apizza.

In 1937, Frank Pepe bought the building next door at 157 Wooster Street, and moved his pizzeria to what is historically understood to be the main (although not the original) location. The original location continued as a pizzeria, called The Spot and was operated by the Boccamiello family.

Like many business owners of the day, Frank Pepe lived above the pizzeria with his family that now included his daughters Elizabeth and Serafina. Everyone worked downstairs in the pizzeria. Frank Pepe became know as “Old Reliable” for his contributions to the community and unwavering love for his growing family.

In the late 1970s, Elizabeth and Serafina, purchased the original bakery (163 Wooster St.) from the Boccamiello’s and re-opened Frank Pepe’s the Spot as an annex to the main building.

Pepe’s reputation as one the country’s premier pizzeria spread through word of mouth. In the early 1990s, Elizabeth and Serafina retired and the business passed to their children – Anthony, Francis, Lisa, Bernadette, Genevieve, Jennifer and Gary – who still operate the business today and have overseen its expansion.

Frank Pepe originated the New Haven-style thin crust pizza which he baked in bread ovens fired by coke. Coke is a byproduct of coal and it was used extensively until the late 1960’s when it became unavailable and hence coal was then put into use to fire the oven.

Pepe’s signature pizza, the White Clam Pizza, was most likely an organic inspiration by Frank Pepe; an idea born from the fact that Pepe’s also served raw little neck clams from Rhode Island, on the half shell, as an appetizer. This development occurred around the mid 1960’s and gradually became popular through the past 40 years. Contrary to what many have heard, Frank Pepe did not have an allergy to cheese and tomatoes and the white clam pizza’s evolution should not be attributed to this false malady.

A lot has happened since Frank Pepe starting baking “ah-beets” 85 years ago. Pizza has gone from an obscure ethnic dish to become a mainstay of the American dining scene. But what hasn’t changed at Pepe’s is the family’s commitment to the tradition of food quality and commitment to the community at large that Frank Pepe envisioned in 1925.”

Read more →
More Stories
Your Afternoon Animal Fix“I think we need to talk about Charles County, or at least their motto.”