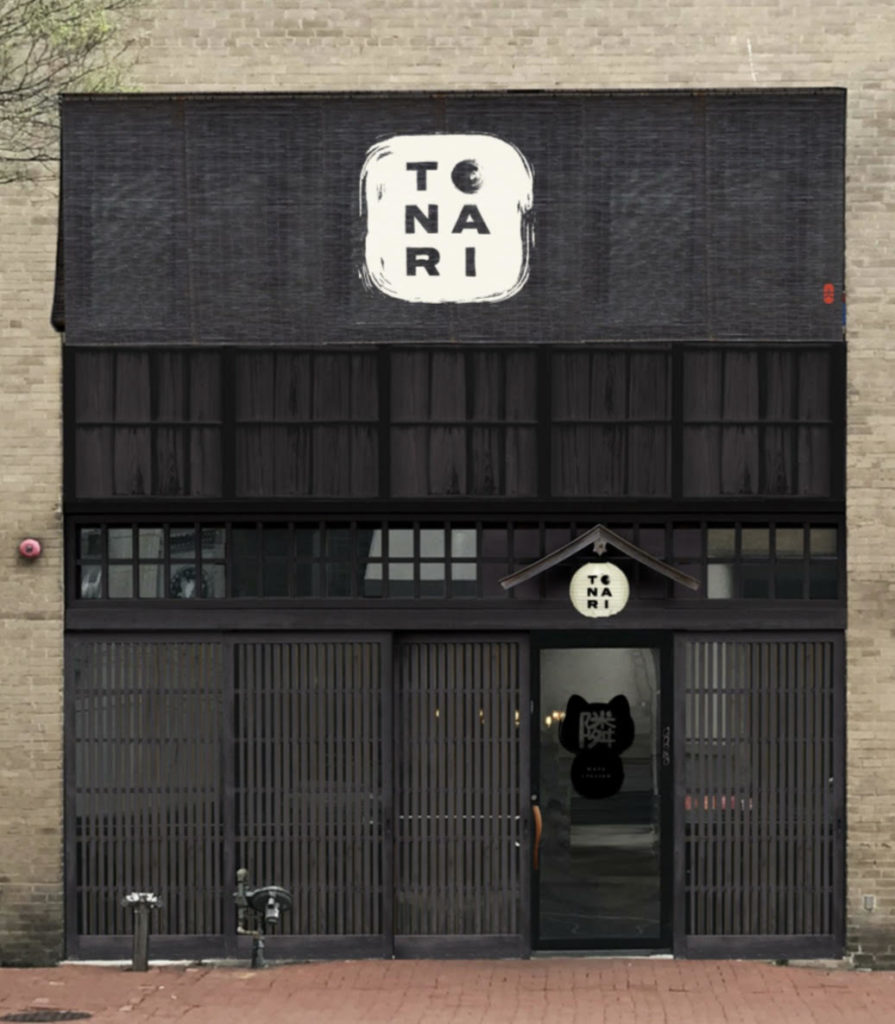 “Celebrated Daikaya Group partners Yama Jewayni, Katsuya Fukushima, and Daisuke Utagawa are thrilled to announce the upcoming opening of their fifth restaurant in the District – ‘Tonari’ – meaning ‘next door’ or ‘neighbor’. Scheduled to open in Winter 2020, Tonari will serve as the first restaurant in Washington D.C. to showcase Japanese-style or ‘Wafu’ pasta and pizza located within the former Graffiato space directly next to Daikaya in Chinatown at 707 6th St NW, Washington, DC 20001.

“At first we were a bit hesitant in taking over the space next door but we were also concerned about who might become our neighbor”, said Yama Jewayni, partner at Daikaya Group. “In a sense, we really wanted to repurpose and recycle the restaurant and that’s how we arrived at Wafu Italian pasta and pizza.”

“When the space ‘next door’ became available the immediate and exciting concept that came to mind was Japanese Wafu pasta and pizza”, said Katsuya Fukushima, Executive Chef and Partner at Daikaya Group. “Then the challenge of conveying what Wafu is kicked in. But for me Wafu cuisine has very much been a part of Japanese culture so I’m excited to have the opportunity to be able to share this special piece of Japan with diners in DC. Ganbarimasu!”

Wafu pasta, meaning Japanese-style pasta (dishes) is a widely loved and well-established cuisine in Japan today. The origin of Wafu pasta dates back to 1953 at a tiny restaurant in Tokyo called Kabenoana (Hole in the Wall). At the time there were only three restaurants serving pasta in Tokyo, one of which was at Imperial Hotel. Kabenoana was serving a plate of pasta at 100 yen, Imperial Hotel’s was 960 yen. From the start Kabenoana aimed to serve wider audiences. As such, the chef of Kabenoana was open to ideas from his regular clients and started using Japanese ingredients to create new pasta dishes. Now classic Wafu pasta ingredients such as Tarako (cod roe) Uni (sea urchin), Shitake, Nori, and dashi emerged as a result of many dialogues and trials between the chef and the customers. In Japan today, there are many Wafu pasta restaurants and the menu items are still evolving incorporating Japanese sensibilities in creating new pasta dishes.

Pizza is also an extremely popular dish in Japan, and there are a wide range of pizza styles and options to choose from. Some pizzerias in Japan have even been known to rival traditional pizzas from Napoli. Some even began to create their own versions with pizza Kaiseki-like service. At Tonari, the team began their journey by working to create a pizza that had a distinctive Japanese flair. The team specifically sought inspiration from Japanese bread, which features a distinct sweet smelling, soft, fluffy, and chewy texture.

To ensure top-notch quality in all of Tonari’s signature pasta and pizza options, Daikaya Group partners called on Yokoyama Seifun, a flour mill in Sapporo which supplies flour to Nishiyama Seimen Co., Ltd. to make their exclusive custom ramen noodles, to assist them in developing their Japanese style pizza dough mix. Yokoyama separates wheat grain in to 70 different components, and they are also extremely passionate about bread making, so Jewayni, Utagawa, and Fukushima realized that partnering with Yokoyama would be the perfect collaboration in developing their Japanese pizza dough. During one of the team’s R&D visits to Yokoyama’s test kitchen, one of the pizzas they tested was a pan pizza using 100% Hokkaido flour and rice oil. The flour helped the dough to rise to that fluffy Japanese bread texture they were looking for, and the combination of the pan and the rice oil shortening created a toasty, almost tempura-like crust. When they tasted it, everyone at the test kitchen thought that it was extremely Japanese and distinctive, and they unanimously agreed it would be their official signature pizza dough and that making their pizzas in a pan was the way to go.

The pasta selections at Tonari are slated to feature both classics such as Spaghetti Napolitan with a sweet tomato-based sauce more similar to ketchup rather than a traditional marinara, and for more creative Japanese-inspired pasta options Chef Fukushima and team have plans to offer an Uni pasta, Natto Bolognese, and Mentaiko Spaghetti, just to highlight a few. Traditional and Japanese-centric ingredients will be also be showcased on some of the signature pizzas such as Corn and Crab Pizza, Tuna Sashimi Pizza, and a Clam and Miso Pizza, to name a few. Daikaya Group’s mission is to utilize Tonari to continue to experiment with Wafu pasta and pizza in Washington D.C.

Following multiple in-depth R&D trips to Japan, Daikaya Group partners teamed up with prolific DC-based design guru Brian Miller of edit lab at Streetsense once again to bring the one-of-a-kind design for Tonari to life. The two-level space will feature 3,600 square feet – 1,800 on the ground floor, and another 1,800 on the 2nd floor, with seating for around 110 total, including seats for 50 in the main dining room and bar area on the ground floor, as well as horigotatsu seating for about 60 on the 2nd floor.

“Inspired by the contrast of eating pizza alongside the Philospher’s Path and pasta in Kyoto’s train station, we wanted the design to lean as traditionally Japanese as the food leans Italian”, said Brian Miller, Senior Design Director at edit lab at Streetsense. “We stripped out the old acoustic ceiling to uncover the building’s wooden roof structure, and added handmade Japanese wallpaper sheets, horigotatsu seating on the 2nd floor, and a moss garden to slow things down to Kyoto’s pace. The music is the most typical Japanese restaurant soundtrack we could construct – a collection of American jazz.”