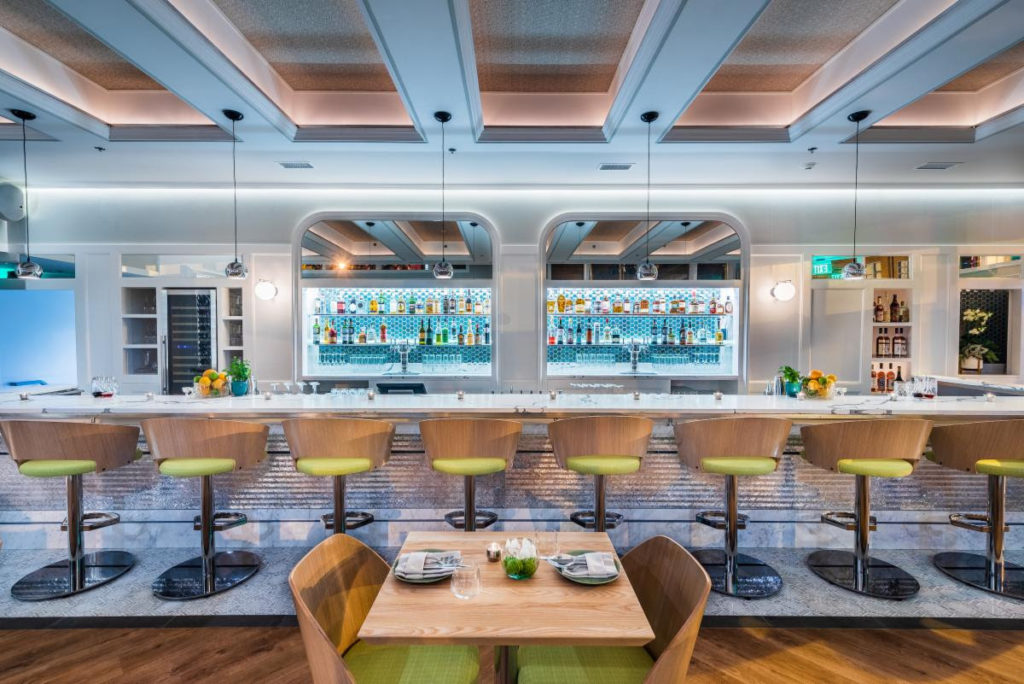 The Imperial – Credit to Rey Lopez 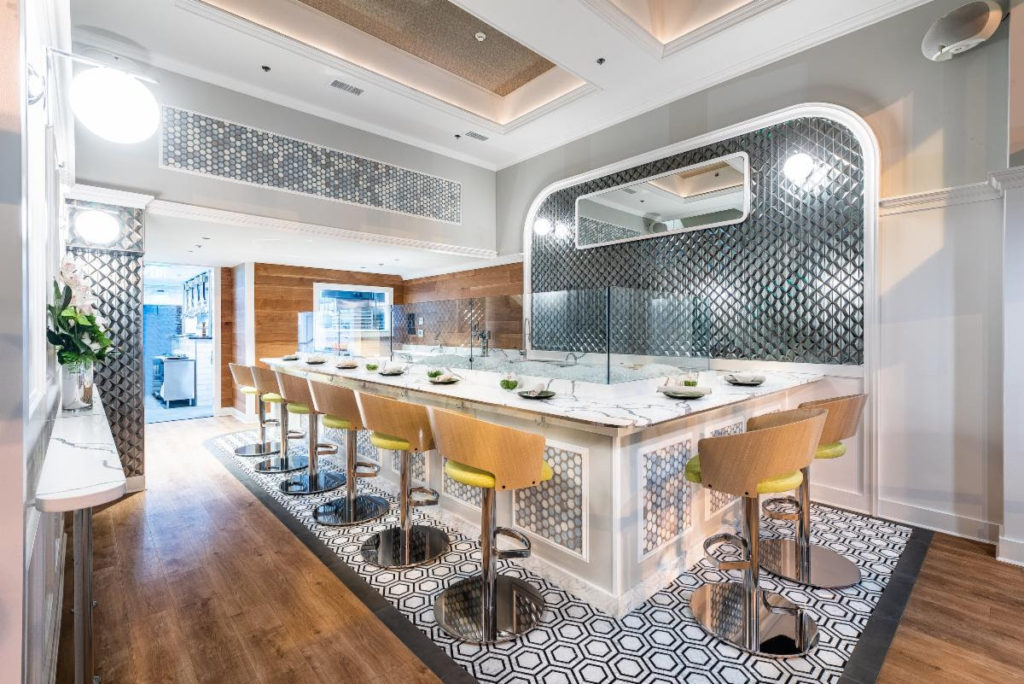 The Imperial – Credit to Rey Lopez

The ground floor features a 40-seat dining room and 10-seat main bar to the left of the entrance, and then a smaller 8-seat cold bar located down a few steps to the right. 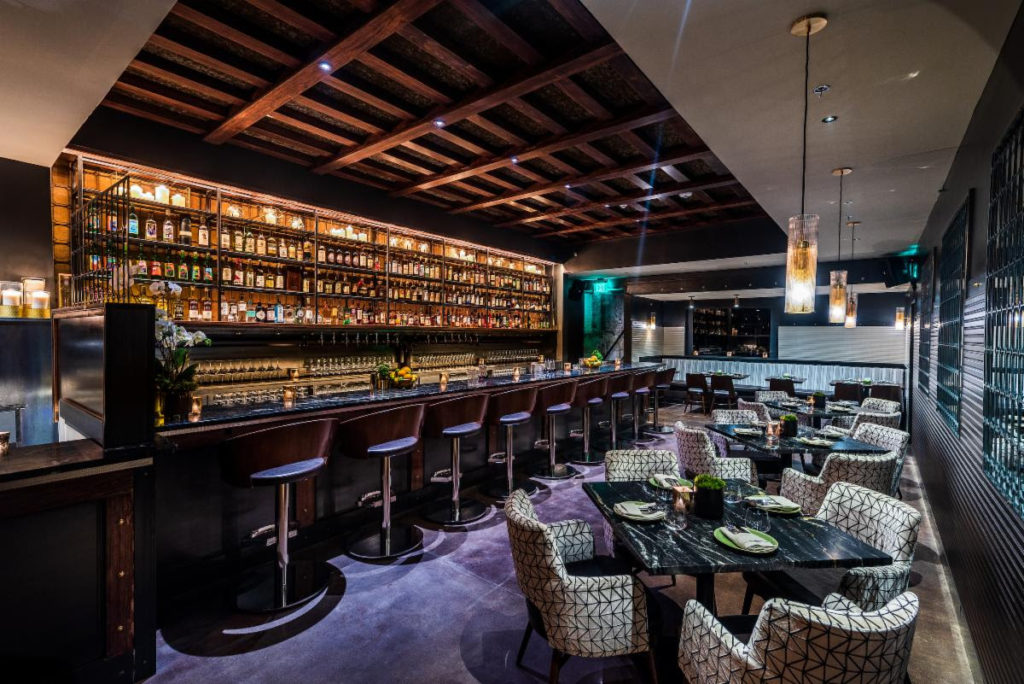 Dram & Grain in the basement retains much of the cozy, intimate feel of the former Dram & Grain bar (housed in Jack Rose’s cellar), but lives in a larger space. The capacity has grown almost 3x, accommodating 50-75 people depending on seated or standing. A highlight of the basement is a warm, inviting Fireplace Room outfitted with a gas fireplace, ideal for the cold weather season. The 24-seat Fireplace Room will also be available for private events.

On the roof, The Imperial has a two-tiered Rooftop Garden & Bar for dining and drinking with stunning vistas of the city, seating approximately 50, and outfitted with lush greenery in the warm-weather seasons.

The space has been designed by Gronning Architects, in collaboration with The Imperial co-owner Stephen King.

Chef Russell Jones, who formerly helmed the kitchen at Jack Rose from 2014-2016 when it received its gleaming 2.5 star review and feature in The Washington Post Dining Guide, has returned to DC from South Carolina to run the food program at The Imperial. Described as “Mid Atlantic cuisine through the lens of southern France,” Chef Jones showcases creative local ingredients with a French influence, a nod to his classic culinary training.

This region’s best seafood will be visually showcased at a small raw bar adjacent to the dining room, and in fish-forward dishes such as Steelhead Vol-au-Vent, featuring golden puff pastry filled with sautéed trout, leeks, artichokes, and a vermouth cream reduction, topped with smoked trout roe ($16), Uni Carolina Gold Rice, featuring fresh sea urchin atop a risotto-style rice cooked with clam juice and mirin ($17); and a delicate Scallop Crudo dotted with flavors of serrano, fennel pollen and coriander citron vinaigrette ($16).

Dishes all range in the medium size, save for two large family-style plates: a carved Koji-aged Bavette served alongside sharable sides of tempura maitake mushrooms and seared green scallions ($39); and a Whole Fish of the Day, currently fried Porgy smothered in puttanesca sauce alongside Carolina gold rice (market price).

Overall, the rotating menu of shareable, creative plates will feature bright, fresh food that pairs well with wines and cocktails.

In the following months, The Imperial will also become a welcome new destination for daytime dining in Adams Morgan and Dupont Circle, eventually serving lunch and brunch. Lunch will offer a small casual afternoon menu, available for dine-in at the Cold Counter or on the rooftop, or to-go. The Imperial will also serve coffee and offer wifi for neighborhood teleworkers. Weekend brunch will also follow after opening.

The Imperial’s beverage program boasts the largest vintage spirits collection in the region (second to Jack Rose Dining Saloon’s whisk(e)y collection), plus impressive wines (everything from sparkling to fortified), and the creative cocktails that Jack Rose’s bar team is renowned for.

A 1000-bottle glass “Showquarium” wine cellar will be a visual draw, showcasing still and sparkling wines, ports, madeiras, sherries and more, as guests descend from the dining room. The fun, unique and accessible wine program helmed by wine director Morgan Kirchner features predominantly natural wines, with almost 20 by the glass and approximately 100 by the bottle. Kirchner has built a list on accessibility with quality, with more than half of the bottles available at under $60. Guests will find aromatic white wines, interesting sparklings, lighter chilled reds, and a spotlight on obscure regions, such as Switzerland, Texas and Bolivia.

The Imperial houses one of the most incredible vintage spirits collections in the country, with more than 400 vintage bottles, ranging from eight decades of Chartreuse, pre-embargo Cuban rum, 1900s California brandy, other antique gin, genever, cognac, tequila, esoteric turn-of-the-century liqueurs and cordials, and even scotch of the same name (distilled at the “dead distillery” Imperial Distillery in Speyside which stopped producing in the 1990s). Sourced by co-owner Bill Thomas, the vintage program will take on the same philosophy as at Jack Rose Dining Saloon: the collection is a “library, not a museum.” The bottles will be priced relatively affordably so they can actually be enjoyed by guests and not merely sit atop shelves collecting dust. “Sacred Slaughter” vintage cocktails will also be available using these spirits and liqueurs up to more than 100+ years old, for guests who want to drink history.

The Cham-Boo! plays tricks on the mind, served tableside like a glass of Champagne, but in reality, is a carbonated on-draft twist on a Bamboo featuring Lustau Jarana Fino sherry, Dolin dry vermouth, Yzaguirre Blanco Reserva and Imperial’s house orange bitters. And Post Sermon Drag is a winter vacation in a glass, combining smoking bishop (a vintage recipe for mulled port) plus Angel’s Envy, Drambuie, demerara, baked pineapple, orange, lemon and a charred cinnamon stick served on pebbled ice.

Jack Rose’s award-winning cocktail den Dram & Grain will move over to The Imperial, giving them more space to accommodate eager guests. In its new home, guests will find some of the region’s most creative, well-executed and envelope-pushing cocktails in an attractive, comfortable and dimly-lit space. Dram & Grain will operate with both reservation-only and open seating sections, a la carte cocktails and in the coming months, a seated tasting menu.”