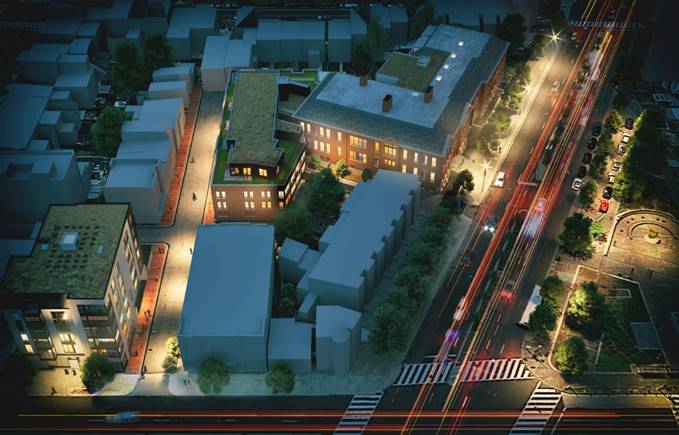 “After a decade of planning with the government and people of Washington, DC, Community Three has broken ground on a $45 million mixed-use redevelopment of the historic Metro-adjacent Grimke School, including a new home for the African American Civil War Museum. The 133,000 square foot project will include multifamily residential, office space, live-work “maker” units, and ground-floor retail. 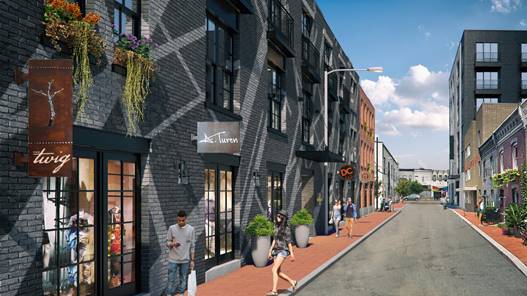 “Rendering of unique live-work “maker” studios with ground-level storefronts on 9 ½ Street, to be developed as part of the Grimke School adaptive reuse project.”

Situated on 9½ Street near the intersection of U Street and Vermont Avenue in DC’s historic Shaw neighborhood, the “9½ Street Initiative” comprises “a collection of residences, work spaces and cultural beacons that celebrate the District of Columbia’s rich artistic character and entrepreneurial spirit,” said Community Three President Grant Epstein. “This is a monumental achievement for us, the neighborhood, and the city.”

“The Grimke School is a special building that, like the neighborhood, has an unmatched and iconic history,” said Washington, DC Mayor Muriel Bowser. “This transformation will uplift and preserve that history by creating not just more housing and jobs, but a space to celebrate the arts and a permanent home for the African American Civil War Museum. Together, we will continue to put equity and inclusion at the forefront of development as we work to meet our bold goal of creating 36,000 homes by 2025.”

The Initiative’s first phase, scheduled to deliver in the Fall of 2020, includes the adaptive reuse of the 132-year-old Grimke School to include about 65,000 SF of loft-style office and cultural arts space that will house the Museum’s 12,000 SF permanent home and new international headquarters of the architecture, urban design and placemaking firm Torti Gallas + Partners, the architect for the entire 9½ Street Initiative effort. About 24,000 SF of office space will be available for lease.

Also delivering next fall will be a new six-story condominium building, The Fold, to be constructed in the former school parking lot. The Fold will offer 30 modern one- and two-bedroom condominiums with efficient layouts and floor-to-ceiling windows. Nine of the residences will be designated affordable. Ground-floor retail space will provide organic opportunities for connection and community.

Phase Two, scheduled to break ground in 2021-22, will transform the Grimke School’s 1920s-era gymnasium into an assemblage of 40 modern, highly amenitized residences, six of which will be unique “maker” studios with distinct ground-level storefronts along 9½ Street. CulturalDC is partnering with Community Three to design and lease these first-of-a-kind live-work spaces. Eleven of the residences will be reserved for households earning less than 80 percent of median family income.

Almost a decade ago, Epstein met with Frank Smith, Executive Director of the African American Civil War Museum, which Smith had founded in 1999 to tell the story of the more than 200,000 African American soldiers and sailors who fought for the Union in the Civil War. The Museum has been located in the former Grimke School gymnasium, now scheduled for redevelopment, across Vermont Avenue from the African American Civil War Memorial, which includes a nine-foot bronze statue called “The Spirit of Freedom” and walls inscribed with names of the servicemen.

Smith and Epstein envisioned revitalizing the dilapidated school building and historic alley, and moving the Museum to a permanent home. Dozens of community meetings were held in the ensuing years, ultimately producing a set of goals encouraging daytime activity and creating new places to live and work for local arts and cultural enterprises.

During this time, the District issued several solicitations for redevelopment of the school property, but all fell short of delivering a prominent home for the Museum. Finally, in late 2017, Community Three won approval from the DC Office of the Deputy Mayor for Planning and Economic Development to redevelop the Grimke School properties into a dynamic mixed-use ensemble that would include a permanent home for the Museum.

The entire project is privately financed; Eagle Bank is the primary lender.

On October 16, 2019, the Museum signed a 99-year lease for space within the renovated Grimke School, allowing a vast expansion of its exhibits and a state-of-the-art media theater. In the fall of 2020, Community Three will deliver a warm lit shell to the Museum, which will then commence a multi-million dollar buildout of its new 12,000 SF space. The new museum at Grimke will have a grand front door and ceremonial porch with a sweeping staircase that will be visible from the African American Civil War Memorial and Metro station entrance. During the its buildout, the Museum will continue to operate in its current location at 1925 Vermont Avenue.

Community Three’s work also will include improvements to the sidewalks on 9½ Street, in order to enhance pedestrian access to Shaw’s exciting new mixed-use destination.

Originally built in 1887, the Phelps School was renamed in honor of Archibald Grimke in 1934. Born into slavery in 1849, Grimke became only the second black graduate of Harvard Law School. He practiced law successfully in Boston before moving to Washington, DC in 1913 to head the District’s branch of the newly formed NAACP. Grimke Elementary School closed in 1989 and housed District government offices until 2012.