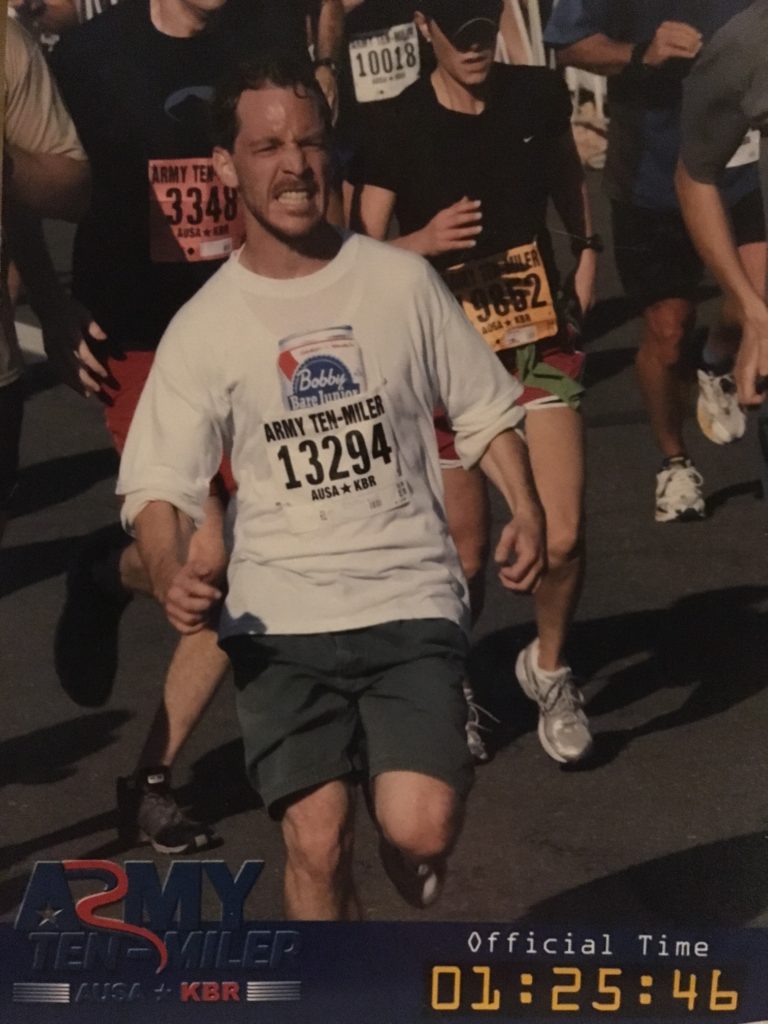 Ed. Note: My first and last race. At the time I was a pack a day smoker and did zero training for the race. I raced well. I couldn’t walk for TEN days afterwards. I have never been in such pain. I am an idiot. Don’t do this race without training. Also, don’t smoke. In January I will have quit smoking 10 years ago. I feel much better now. Anyway, good luck runners!

“The 35th Anniversary edition of Army Ten-Miler (ATM) is this Sunday, Oct. 13 at 8:00 a.m. EDT in Washington, DC. The 10-mile road race starts and finishes at the Pentagon, traversing a scenic course that takes the 35,000 runners through downtown Washington, D.C.

Race Weekend officially kicks off this Friday, Oct. 11 with the ATM Expo presented by Navy Federal Credit Union (NFCU), at the DC Armory (2001 E. Capitol St., SE), offering deals on clothing, shoes, accessories and other health and fitness items. All runners must collect their bib and race packet at packet pick-up which takes place during the ATM Expo. There is no packet pick-up on Sunday/race day.

Free and open to the public, the ATM Expo highlights include Interactive Military Displays, presented by the U.S. Army Special Operations Recruiting Battalion (SORB) booth and on the lawn outside of the DC Armory. SORB displays will feature the debut of ARMYCON’s live eSport gaming tournament, helicopters, 18-foot simulator trailer, Special Operations equipment and more. Open from 10 a.m. until 6 p.m. on Oct. 11-12, the Expo is accessible by Metrorail, taking the Blue, Orange or Silver Line and exiting at the Stadium/Armory Station, or, by car, park for free in Lot 3 at the Armory. U.S. Military or Civilians with CAC/USID may access the Expo at 8:30 a.m. both days.

Registration is open for the Youth Run, a non-competitive 400m run for children ages 4 through 10. It takes place in the North Lot of the Pentagon, following the ATM, at 11:30 a.m., with children crossing the official ATM Finish Line. Cost is $15 per child and includes race bib, t-shirt and medal.

The Washington Metropolitan Area Transit Authority (WMATA) will open Metrorail one hour early, at 7:00 a.m., on race day. Runners and spectators are advised to utilize the Trip Planner function at www.wmata.com to plan their trip to the Pentagon City Metro Station. Visit wmata.com.

Even non-runners are part of the Army Ten-Miler experience, with crowds of onlookers cheering the runners on, using cowbells, noisemakers and signs to offer motivation along the course. Here are some of the best places for spectators to watch the race:

Finish Line Area/Mile 10: The number-one place to be a spectator! Watch 26,000+ runners cross the finish line in the Pentagon North Lot. To get to there, take the free event shuttle, presented by KBR. The shuttle will run continually between Pentagon North and Pentagon South lots from 4 a.m. -1 p.m.

Kennedy Center: Enjoy fantastic views of the action from this scenic location on Rock Creek Parkway. Get there by taking the Blue or Orange Metro lines to the Foggy Bottom Metro Station. If driving, be sure to check the Race Day Road Restrictions on the “Hotel & Travel” page.

Independence Avenue: There are many locations along this street to get a good view of the race. Afterward, head to the National Mall or a museum to continue your D.C. experience!

Army Navy Drive/Before Mile 9: This is where runners know they are nearing the finish line and are finding their second wind! From there, walk over to the Pentagon South Lot and catch the free event shuttle, presented by KBR, and head to the North Lot to enjoy the post-race activities.

Road Closures: The Arlington County Police Department will close several streets near the Pentagon for the 35th annual Army Ten-Miler. The race begins at 7:50 a.m. on Route 110, crosses the Key Bridge into the District of Columbia, returns to Virginia via I-395 HOV, and ends in the Pentagon North Parking lot.

Route 110 between Rosslyn and Crystal City will be closed in both directions at 5:00 a.m. (Use the George Washington Memorial Parkway as an alternative) CLOSED UNTIL APPROXIMATELY 2:00 p.m.

S. Eads Street from Army Navy Drive into the Pentagon/ northbound I-395 HOV lanes will be closed at 5:00 a.m.

Route 27 in both directions from George Washington Memorial Parkway to I-395 will be closed from 7:00 a.m. until 10 a.m.

Long Bridge Drive will be closed from S. 12th Street to Boundary Channel Drive from approximately 8:00 a.m. until 12:00 p.m.

Road Closures: The road closures for the ATM in the District will include:

In addition, access to the Pentagon North Parking lot will be restricted to “Authorized Vehicles Only” from 4:30 a.m. until 2:00 p.m. Parking for Pentagon employees and Pentagon Memorial patrons will be available in the South Parking lot via Columbia Pike and S. Joyce Street.

Runners, spectators, and support personnel are encouraged to use Metro, as parking is limited. The Pentagon and Pentagon City stations on the Blue and Yellow Lines are located within walking distance of the start and finish lines.

Runners may also be dropped off at the “Hayes Street Parking Lot” near the intersection of Army Navy and S. Hayes Street. Drivers should follow signs for Pentagon City.”