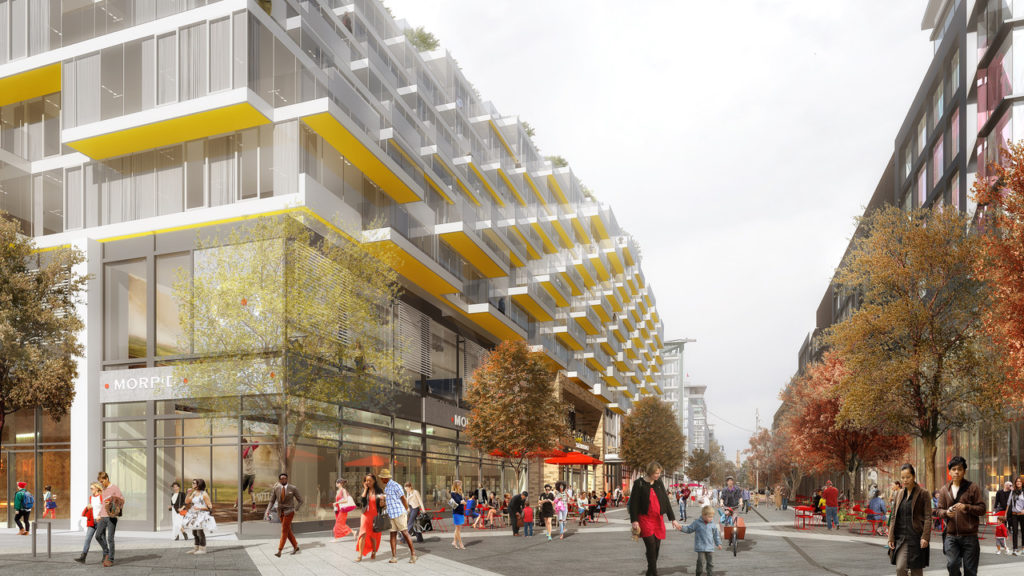 “JBG SMITH Properties (NYSE: JBGS), a leading owner and developer of high-quality, mixed-use properties in the Washington, DC market, today announced the commencement of leasing for West Half, its 388,174-square foot mixed-use development project in DC’s Ballpark District. West Half comprises 465 residences ranging from studio to three-bedroom apartment residences that vary in size from 596 square feet to 2,021 square feet. JBG SMITH also announced that new eateries Basebowl and HipCityVeg have signed leases and will join West Half’s collection of retailers.

Designed by renowned New York-based ODA Architecture, West Half features an iconic multi-dimensional façade, modern interiors and ultramodern amenities. West Half residents will be connected to all the features and amenities in the Ballpark District, including Nationals Park, the Navy Yard – Ballpark Metro, the Capital Riverfront, the Yards, and the Anacostia Riverwalk Trail. West Half’s light-filled living spaces have sweeping views of Nationals Park; wide-plank flooring; chef-caliber kitchens with stainless steel appliances, Caesar stone countertops and high-end fixtures; and spa-inspired baths with stone countertops. Select residences with larger terraces facing the ballpark are part of JBG SMITH’s new 1205 Collection. Information about the 1205 Collection is available upon request.

Amenities at West Half include: a hotel-styled social rooftop space overlooking Half Street and Nationals Park; a rooftop pool and sundeck with BBQ grills, cabanas and chaise lounge chairs; a two-story private-access resident’s lounge; a state-of-the-art fitness center with sports club equipment and machinery; tranquil greenspaces; 24/7 concierge; LuxClean by The Minte housekeeping services; bike storage; and on-site parking in a controlled access garage.

“With the delivery of West Half and the 1205 Collection to the Ballpark District, we are creating a shift in urban living with iconic design, top-of-the-line features and an impressive mix of entertainment, food and beverage, and amenities retailers,” said Anthony Greenberg, Executive Vice President for Development at JBG SMITH. “It is important that we provide our future residents with variety and balance, and West Half has that. Whether our residents want to be a part of the action on game day or have a relaxed night at home, West Half has much to offer.”