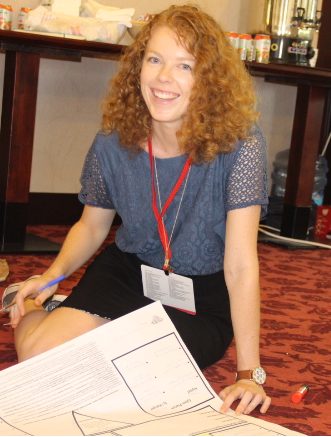 NBC Washington reported she “was walking a dog for a family in Northwest D.C. when a man fatally stabbed her in a seemingly random attack, police say.”

“Margery Magill was literally one of the brightest stars I ever had the pleasure to know and watch grow up. Gracious, poised, kind, empathetic. When I left the area for my first career, I remember leaving a little kid who was the daughter of my FFA advisor, who had bushy curly hair and had her own opinions about what life should look like. Almost 10 years went by, then I moved back for vet school and reconnected with my FFA advisor who offered to house my horses for me….and met this incredibly charismatic woman who had grown up into an incredible person while I was gone. She had the type of energy and smile that made you feel comfortable instantly. I trusted her, respected her, and quite honestly was in awe of her – fearless international traveler, ambitious, and mature.

And then. A guy ran up behind her last night and stabbed her to death as she walked a dog in Washington D.C.

There’s no motive. As far as anyone knows it was absolutely and and completely random. The guy has been arrested and has been charged with first degree murder.

That sucks. It’s horrible. I can’t even process that this actually happened to someone I know and care about.”

“Detectives from the Metropolitan Police Department’s Homicide Branch are investigating a fatal stabbing that occurred on Tuesday, August 27, 2019, in the 400 block of Irving Street, Northwest

At approximately 8:49 pm, members of the Fourth District responded to the listed location for the report of an unconscious person. Upon arrival, members located an adult female victim suffering from multiple stab wounds. DC Fire and Emergency Medical Services responded to the scene and transported the victim to an area hospital. After all lifesaving efforts failed, the victim was pronounced dead.

The decedent has been identified as 27 year-old Margery Magill, of Northwest, DC.

On Wednesday, August 28, 2019, 24 year-old Eliyas Aregahegne, of Northwest, DC, was arrested and charged with First Degree Murder While Armed.”

Read more →
More Stories
Double Shooting in Hill East around 9:45pmDepartment of Parks and Recreation moving their Headquarters from U Street to NoMa