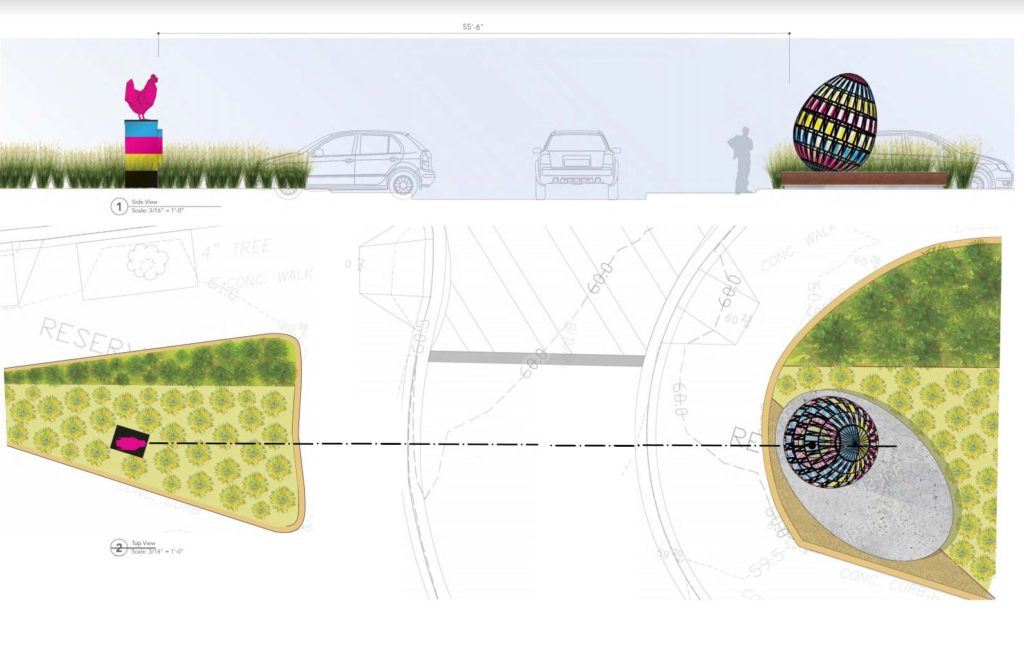 “It’s a question as old as philosophy itself: Which came first, the chicken or the egg? In NoMa, it turns out, they arrived simultaneously. This week, the NoMa Business Improvement District (BID) is installing The Chicken and the Egg, a two-piece sculpture, on a U.S. National Park Service (NPS) property at the southeast corner of the New York Avenue and North Capitol Street intersection. The public artwork is the first realization of the BID’s Gateways Project (nomabid.org/gateways), a long-term effort that will use art to transform key intersections around NoMa.

The idea of neighborhood gateways was first mentioned in the NoMa Public Realm Design Plan, published in 2012, and then expanded upon in the BID’s Strategic Plan 2016-2021, the result of two years of stakeholder engagement and visioning for the future of NoMa. The goal is to turn these spaces into signature streetscape moments that create positive experiences for pedestrians, cyclists, and drivers; provide a strong visual identity for NoMa; and celebrate the neighborhood’s history and character.

“We are always excited to bring new public art to NoMa and brighten the neighborhood with color,” said BID President Robin-Eve Jasper. “More people will be using the intersection of North Capitol Street and New York Avenue over the coming years as NoMa and Truxton Circle build out. The Chicken and the Egg will help connect the two neighborhoods and serve as an iconic destination point for pedestrians and bike riders.”

The Chicken and the Egg is located on NPS reservation 0183, where New York Avenue and N Street NE meet at North Capitol Street; the site has long been bisected by a curved roadway that allows drivers on N Street to turn onto eastbound New York Avenue. The artwork consists of two elements: (1) On the western parcel is the chicken, a nearly 4-foot tall geometric figure standing on an existing utility box. The fiberglass farm bird is painted a glossy magenta, and the box has been painted with broad cyan, magenta, yellow, and black horizontal stripes. (2) On the eastern parcel is the egg, a hollow aluminum form, almost 9 feet tall, whose porous shell comprises horizontal bands of the letter N. The exterior is painted black, while the interior is painted in alternating bands of cyan, magenta, and yellow. At the top of the interior is a solar-powered light that will make the egg glow at night and cast shadows on the surrounding sidewalks. The two sculptures are aligned so that the chicken looks directly at the egg, which tilts back slightly to the east. The NoMa BID, which paid for the artwork, will maintain the sculptures and the plantings that surround them.

Created by Harry Mark, a designer based in San Clemente, California, The Chicken and the Egg is inspired by the history of the NoMa neighborhood, a playful comment on the conundrum of ongoing change in the area, and suggestive of the role that transportation of both goods and people has had in those changes: Union Station opened in 1908, and Union Market Terminal, D.C.’s primary wholesale market (where one could purchase eggs), was part of the commercial development wave that followed. In 2004, a new Metro station opened, and in the years since, the area has become denser, more vibrant, and mixed-use. The cyan, magenta, yellow, and black (CMYK) colors used in the artwork are indicative of the area’s history as a center of printing, including the Government Publishing Office (GPO); the historic Judd & Detweiler building at

Florida Avenue and Eckington Place NE, where National Geographic was printed in the early 20th century; and the historic Press House building at N and 3rd streets NE, where the Congressional Record and training manuals for the War Department were printed. Mark is principal of the environmental design firm RSM, which created the NoMa BID’s recently installed street pole banners. The banners employ a similar CMYK color scheme and celebrate the neighborhood’s past through the use of historical photos.

With the first NoMa Gateway complete, the BID is now prioritizing the intersection of North Capitol Street and H Street NW, by the GPO building, and the intersection of New York and Florida avenues NE, for Gateway artwork. No timeline has been established for either location.

Additionally, the District government’s plan to rework of the “virtual circle” defined by New York, Florida, and First Street NE into a more-attractive space that is safer for pedestrians, bicyclists, and drivers provides public spaces that could be enhanced with art, said Jasper: “The upcoming redesign of this cramped confluence of roads into a place that not only moves cars efficiently but, more important, welcomes people and knits the neighborhood back together is an incredible opportunity.”