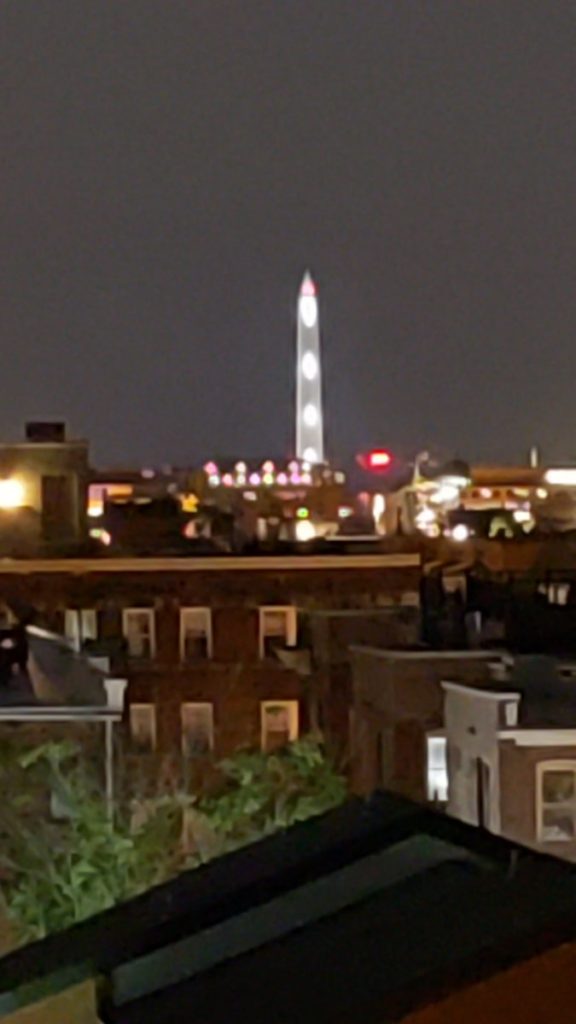 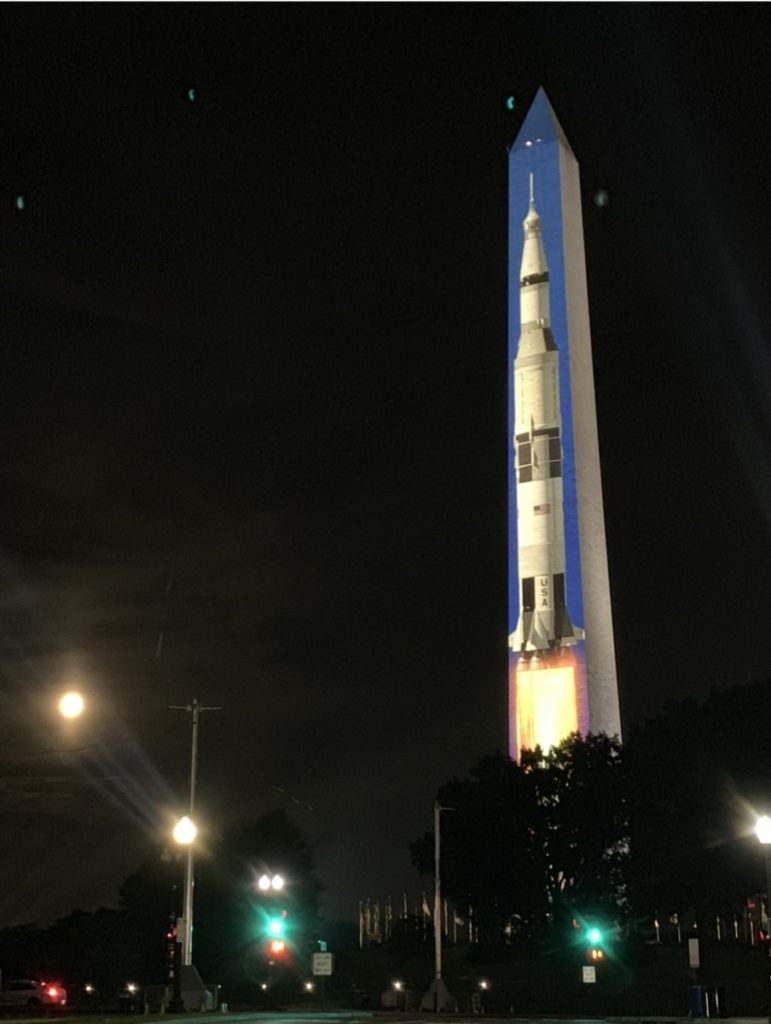 DC Boy writes us: “From this morning on my run into work. The picture doesn’t do it justice. It was very awe invoking.” 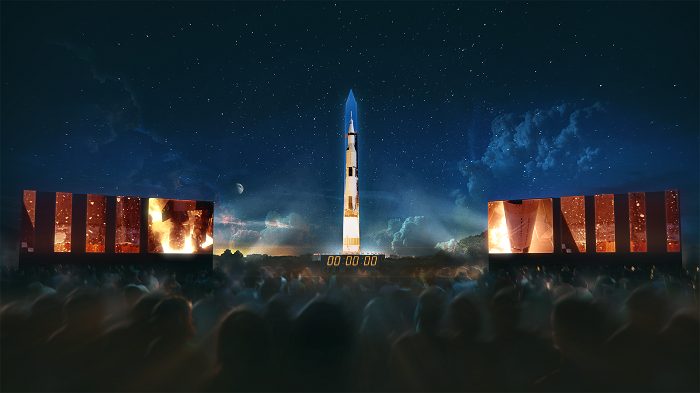 From the National Air and Space Museum:

“The Smithsonian’s National Air and Space Museum will present a once-in-a-lifetime celebration of the 50th anniversary of Apollo 11 this July in partnership with the U.S. Department of the Interior and 59 Productions. For three nights–July 16, 17 and 18–a full-sized, 363-foot Saturn V rocket will be projected onto the east face of the Washington Monument from 9:30 p.m. to 11:30 p.m. On Friday, July 19, and Saturday, July 20, a special 17-minute show, “Apollo 50: Go for the Moon” will combine full-motion projection-mapping artwork on the monument and archival footage on screens to recreate the launch of Apollo 11 and tell the story of the first moon landing.

“Our identity as Americans is defined in part by the historic act of landing humans on the moon and returning them safely to the Earth,” said Ellen Stofan, John and Adrienne Mars Director of the museum. “The Washington Monument is a symbol of our collective national achievements and what we can and will achieve in the future. It took 400,000 people from across the 50 states to make Apollo a reality. This program celebrates them, and we hope it inspires generations too young to have experienced Apollo firsthand to define their own moonshot.”

The historic presentation of “Apollo 50: Go for the Moon,” conceived and commissioned by the National Air and Space Museum, is made possible by a unanimous, bipartisan joint resolution of Congress, sponsored by the Smithsonian Board of Regents and signed by President Donald J. Trump.

“Almost 50 years ago, the Apollo 11 mission captivated the world as two American astronauts were the first to step foot on the moon, forever changing space exploration,” said Interior Secretary David Bernhardt. “Through House Joint Resolution 60, Congress requested a one-time series of arrangements for displays on the National Mall and the Washington Monument to showcase this incredible achievement in our nation’s history, and we’re pleased to partner with the National Air and Space Museum so all can relive the moment.”

“The Saturn V is an indelible symbol of the Apollo program, built by Boeing and its heritage companies,” said Tim Keating, Boeing executive vice president of government operations. “We are proud to have been a part of one of history’s greatest achievements. We’re excited to support the national celebration of that historic undertaking as Boeing continues to play a leading role in the next generation of space exploration.”

The public will be able to experience “Apollo 50: Go for the Moon” July 19 and 20 from viewing areas on the National Mall in front of the Smithsonian Castle between Ninth and 12th streets. The viewing area will be outfitted with full sound, projection screens and a 40-foot-wide recreation of the famous Kennedy Space Center countdown clock. The free show will run three times on both nights–9:30 p.m., 10:30 p.m. and 11:30 p.m. More information about the viewing area and show times can be found at https://airandspace.si.edu/go-for-the-moon, or text Apollo50GO to 888777 for live updates the day of the show.

The National Air and Space Museum commissioned the creation of “Apollo 50: Go for the Moon” from 59 Productions, a multi-award-winning company of artists, architects, designers and technologists offering world-leading expertise in design for stage and live events, architectural projection-mapping to exhibition design, VR experiences and technical consultancy.

Created in 2006 and led by directors Leo Warner, Mark Grimmer, Lysander Ashton, Richard Slaney and Anna Jameson, 59 Productions created the video design of the opening ceremony of the London 2012 Olympic Games, the design and creative direction of the record-breaking “David Bowie is” exhibition and the projection and video design of the National Theatre stage production “War Horse,” which has reached audiences of more than 7 million people in 11 countries. The company received a Tony Award in 2015 and an Olivier Award in 2018 for the video design of Christopher Wheeldon’s celebrated stage adaptation of “An American in Paris,” which played on Broadway and in the West End. “Apollo 50: Go for the Moon” is directed by Richard Slaney, with music by Emmy Award-winning composer Jeff Beal.

Support for “Apollo 50: Go for the Moon” and all of the museum’s Apollo 50th-anniversary programming is provided by Boeing with additional support from Raytheon.

The National Air and Space Museum in Washington, D.C., is located at Sixth Street and Independence Avenue S.W. The Steven F. Udvar-Hazy Center is located in Chantilly, Virginia, near Washington Dulles International Airport. Both facilities are open daily from 10 a.m. until 5:30 p.m. (closed Dec. 25). Admission is free, but there is a $15 fee for parking at the Udvar-Hazy Center.”

Next
Front Page Closing Party Announced for Sunday, August 11th, “it’s our intention to move to a new location and operate for another 30 years.”