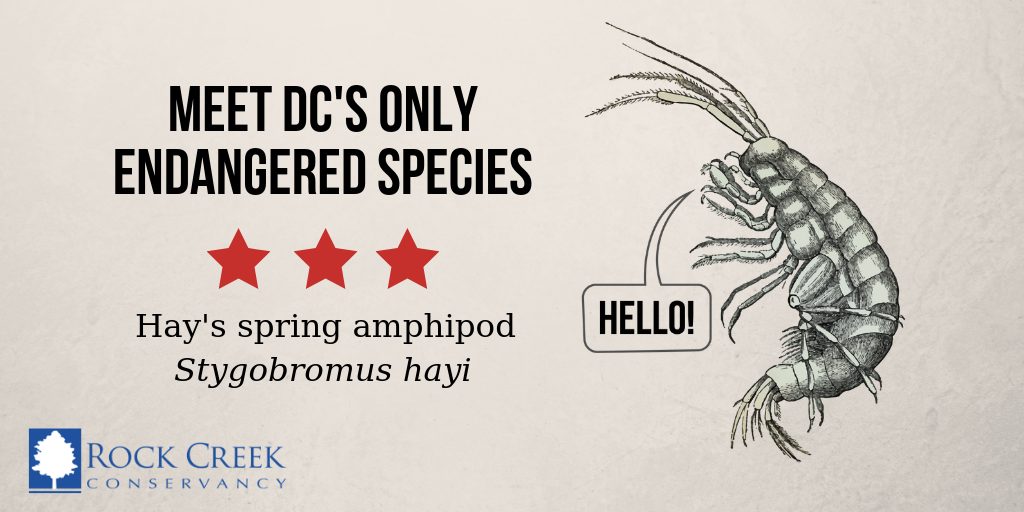 Ed. Note: The following was written by staff of the Rock Creek Conservancy. PoPville is proud to be a media sponsor for 2019.

Today, Rock Creek Conservancy is thrilled to announce our new collaboration with PoPville! For those of you who don’t know us, the Conservancy is a local environmental organization and an official philanthropic partner to Rock Creek Park. We are dedicated to restoring Rock Creek and its parks as a natural oasis for all people to appreciate and protect. As we work together, you can expect monthly features from us about all that Rock Creek and Rock Creek Park has to offer and how you can help us restore this unique urban oasis that winds through the heart of our city.

IMPORTANT: While the facts below are sure to pique your amphipod interests, it is vital that you don’t go searching for them in the wild. There are so few Hay’s spring amphipods left that disturbance to their habitat could easily result in their extinction.

The Hay’s spring amphipod was first discovered in 1940. Since its discovery, this crustacean has only ever been found in eight small seepage springs along Rock Creek. Because of its small population, sensitivity to urban development, and changes in water quality the animal was officially declared endangered in 1982. 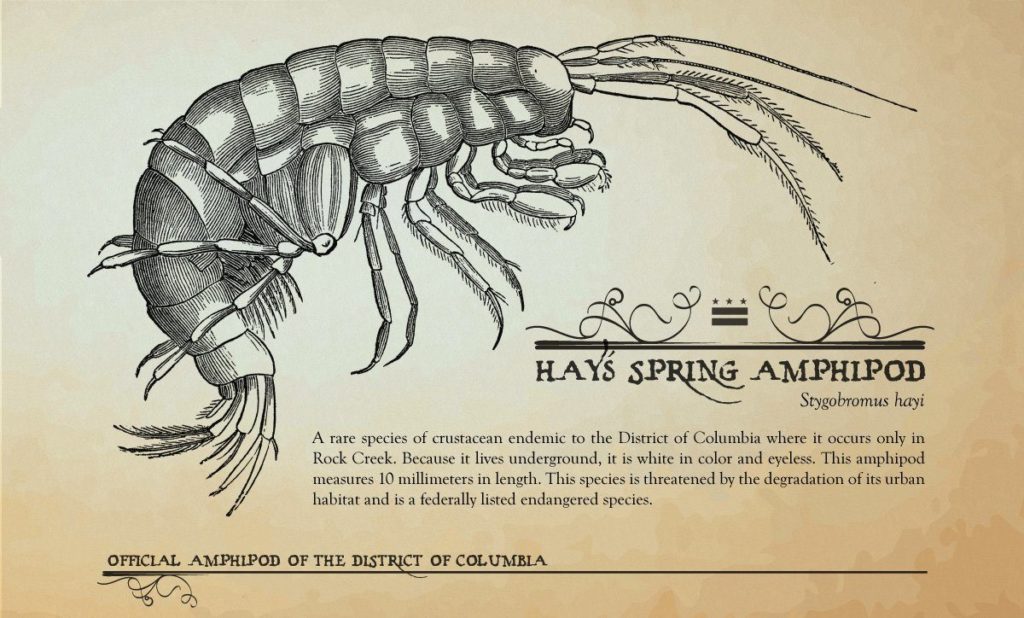 In 2016, Mayor Bowser made the Hay’s spring amphipod the official amphipod of DC. Illustration via the DC Department of Energy and the Environment.

In 2016, this shrimp-like animal was named the official state amphipod of Washington, DC! As far as we know, Washington, DC is the only “state” with an official amphipod.

Because it is only found in a few small seepage springs and it is incredibly dependent on local water quality, this crustacean is the perfect spokes-creature to convey the importance of our work to restore Rock Creek. 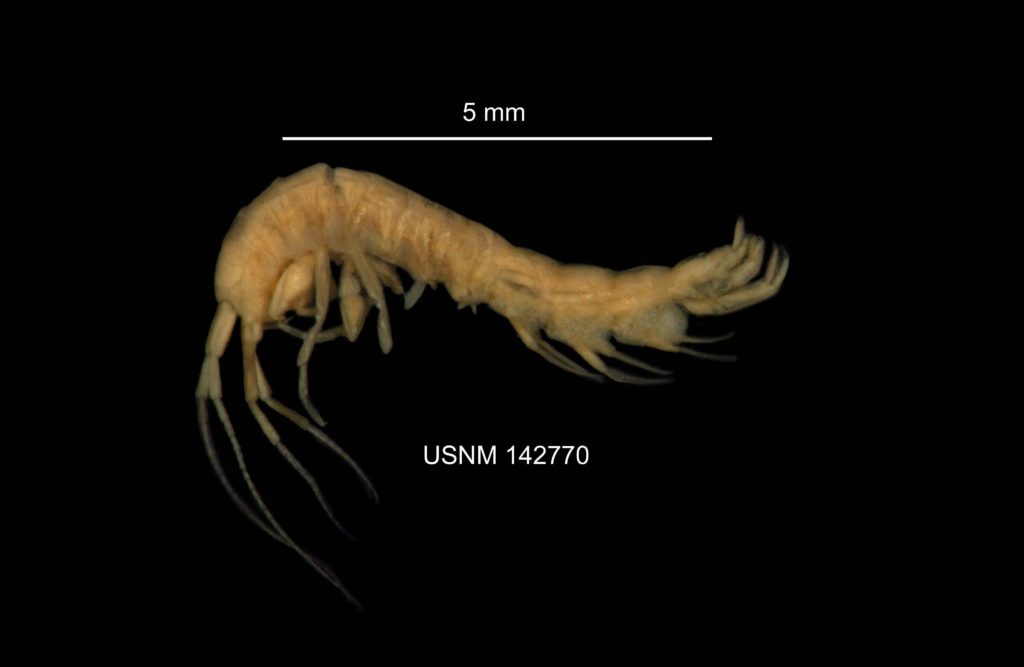 The Hay’s spring amphipod is colorless and eyeless as a result of spending its entire life underground in seepage springs. Image via Michelle Brown/Smithsonian Institution, National Museum of Natural History, Department of Invertebrate Zoology.

This critter lives its entire life amongst soggy leaf litter, underground in seepage springs. As a result, Stygobromus hayi have no eyes and no pigmentation. Why would you need them if you never see the light of day? These critters also have longer legs than other amphipods, presumably to feel their way around the dark crevices they call home.

Understanding exactly where an animal lives is critical to conservation and management. However, for tiny underground animals, that is easier said than done. In order to study them without disturbing their habitat, scientists analyze the water for trace amounts of amphipod DNA. When the DNA is present, we know that the amphipod is too!

The main threats to this native DC resident are habitat destruction and water pollution. Stormwater flooding can mean entire amphipod habitats get washed away. Plus, they are very susceptible to changes in the environment that come from urban stormwater pollution. For instance, salt from the road affects the salinity of the water they live in and can make it impossible for them to survive. 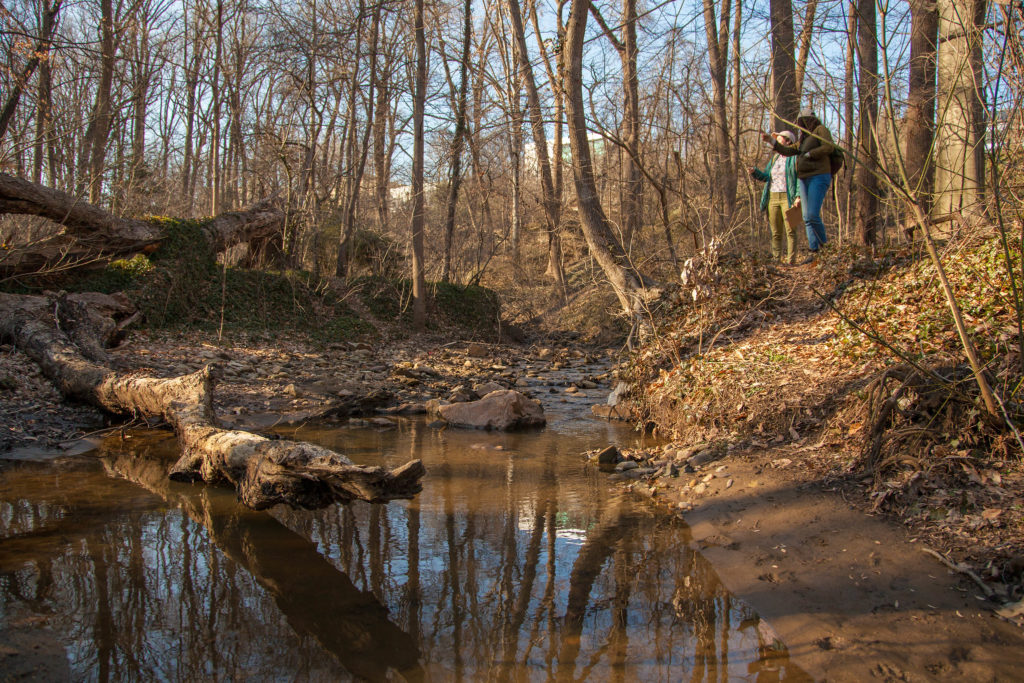 Stormwater runoff is a threat to the Hay’s spring amphipod and Rock Creek as a whole. In this image, two Conservancy staff members discuss stormwater threats and plan for a volunteer event as they survey Melvin Hazen Creek, which flows into Rock Creek. Photo via Rock Creek Conservancy.

Now that you know a bit more about DC’s own endangered species, we hope that you will help us protect it! The threats to this iconic species are also some of the biggest threats to the health of Rock Creek. Join us to stop stormwater pollution in Rock Creek by attending our volunteer events, supporting green infrastructure, and working outside-in in to keep neighborhood litter, pet waste, and stormwater from flowing into Rock Creek!

Want more amphipod facts or to learn more about our work? Check out the full blog on our website.