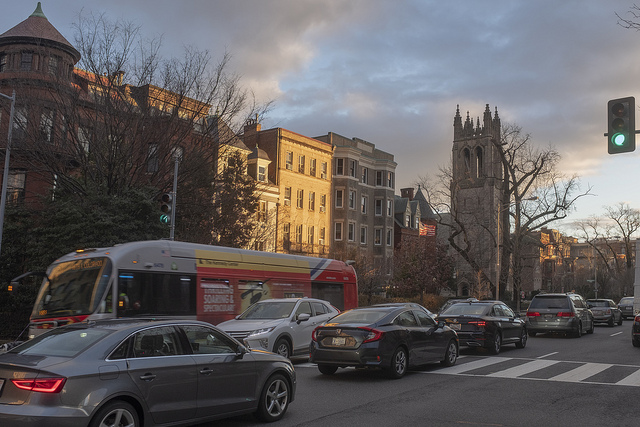 “Metrobuses now get the green light ahead of other traffic at six key intersections in the District of Columbia. New “bus only” traffic signals allow buses to proceed through the intersections before the standard traffic signals turn green, allowing the bus to proceed ahead of other vehicles. The technology, known as “queue jump,” is part of a package of improvements designed to speed bus trips and keep service on time.

The new signal system gives priority to transit vehicles by displaying a short “proceed” indication on the “bus only” signal before providing a green light to other vehicles. The system enhances safety allowing the bus to pull away from the bus stop without relying on other motorists to yield to the bus.

“This is a major step forward to provide faster, safer, and more reliable bus service for thousands of daily Metrobus riders,” said Metro General Manager and Chief Executive Officer Paul J. Wiedefeld. “I want to thank our partners at the District Department of Transportation for their support of the program, and we look forward to expanding this technology to other intersections in the future.”

“DDOT is committed to improving the transportation network across the District and under Mayor Bowser’s leadership we’ll continue to support more reliable bus service for residents by embracing technology as a way to reduce congestion and improve bus times,” said District Department of Transportation Director Jeff Marootian.

The six locations where the new signals are active are:

When a Metrobus is stopped at the intersection, the bus-only traffic signal indicates when to proceed with a vertical bar, which serves as the bus’ green light. After three seconds a flashing triangle shows the priority signal is about to end, followed by a horizontal bar that buses no longer have priority and must obey normal traffic signals.

The new queue jump system was funded through a Federal Transit Administration (FTA) Transportation Investment Generating Economic Recovery (TIGER) Grant provided through the District Department of Transportation as part of a package of improvements.”

Read more →
More Stories
Your Afternoon Animal Fix“The story of Wendy Martinez, the runner stabbed in Logan circle last fall, was so hard for so many of us in DC.”