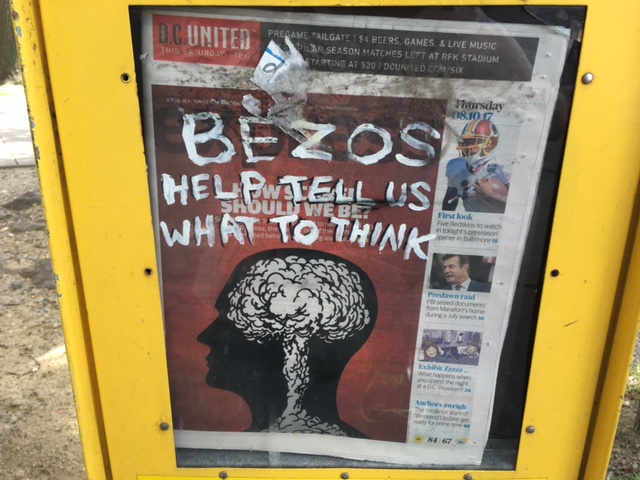 There may not be a tremendous D.C. neighborhood connection, [wait he’s building that massive house in Kalorama, we good!] but boy oh boy is this batshit crazy. Jeff Bezos:

“A few days after hearing about Mr. Pecker’s apoplexy, we were approached, verbally at first, with an offer. They said they had more of my text messages and photos that they would publish if we didn’t stop our investigation.”

From The Hill subsequently reported:

“A reporter at the Washington Post says that an investigator hired by Amazon CEO Jeff Bezos believes that text messages leaked to the National Enquirer between Bezos and his girlfriend may have been sent to the magazine by someone in government.”

So predictions please! How do you think this plays out?

Ed. Note: The movie, streaming exclusively on Amazon, obviously, is gonna be so freaking good.

photo by Matt Berman Ed. Note: If this is you, please email [email protected].com so I can put you in touch with OP. “Dear PoPville, Section 228 at Elton John, I…