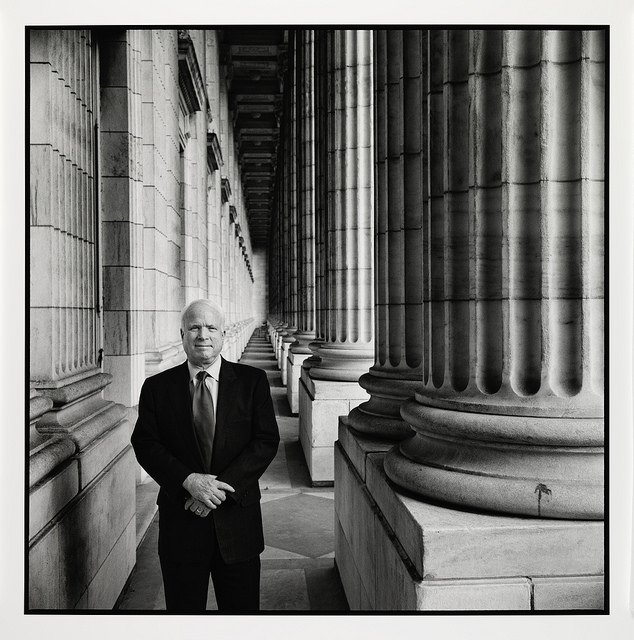 “The Smithsonian’s National Portrait Gallery recognizes the life and legacy of late Senator and former presidential nominee John S. McCain III with a photograph by the British-born photographer Steve Pyke. The portrait will be installed this morning in the museum’s In Memoriam space on the first floor.

McCain, who was born in 1936, was an established politician and Lieutenant Commander in the U.S. Navy. Before entering politics, he demonstrated great commitment to his country by enduring five-and-a-half years as a prisoner of war after his plane was shot down during the Vietnam War. Following his release from prison in 1973, he later relocated to Arizona where he began a career in politics. A long-time Republican, McCain was the winner of the party’s presidential nomination in 2008. His lifetime commitment to public service is marked by his two years in the House of Representatives and his work as a six-term elected Senator of Arizona. He also served as chairman of the Senate Committee on Armed Services. Despite his battle with brain cancer, McCain served in the Senate until his death. He is survived by his wife and seven children.

This portrait of the late Senator was taken in 2005 by Steve Pyke, who at the time was a staff photographer for The New Yorker. Pyke gained wide recognition while working for leading publications in the 1980s and is known for having a distinctive, close-up portrait style. Commenting on the relationship between photographer and sitter, Pyke has said, “That encounter, that exchange, is often brief, but the image which we make of those moments can be the way a person is remembered beyond their own lifetime, remaining long after the voice has been forgotten.” (New York City, 2007)

Pyke’s work was featured in the Portrait Gallery’s “Portraiture Now: Feature Photography” exhibition in 2008, and he is represented in the museum’s permanent collection.”

Next
What’s Going On This Week? Here are the Best Events in Town