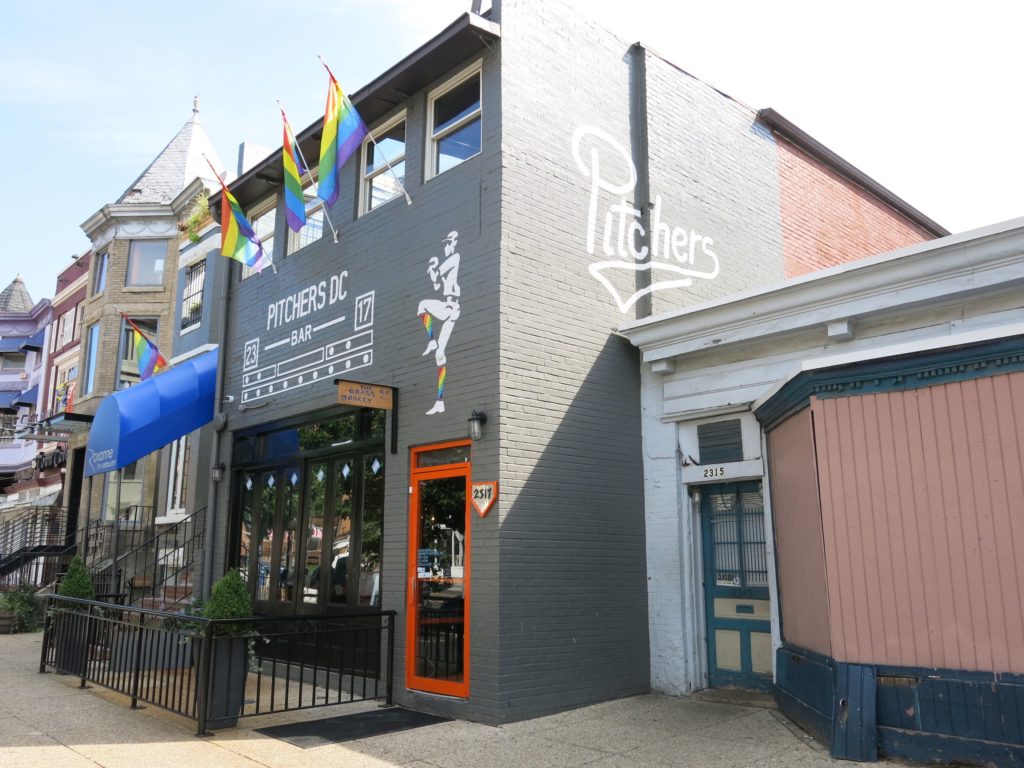 A week ago, I was a part of a bachelorette party as the only male member of the group, as the bride is my best friend. With the exception of a winery tour that had happened much earlier in the day, the party as an event was loosely structured and we had no firm plans for what the evening of Saturday would look like. We had narrowed down what we wanted to do to a geographic area – either Adams Morgan or Dupont. No one wanted a wild evening as we had a brunch reservation the following morning, so as far as pre-wedding events go, this was definitely a tempered and responsible occasion. Per my recommendation, I suggested to the bride that we go to Pitchers – not because I was gay and wanted to go there because it was a gay bar, but because (based on the one time I visited there a month earlier) they had Mario Kart on their walls and an assortment of games that would have simply sustained a fun evening. Rightfully, she said this sounded like a great idea and after an hour and a half of getting ready, we were headed to the bar at 10:30 PM.

I will preface this anecdote by mentioning my first and only other experience at Pitchers. I had a great time there, albeit subdued. The atmosphere was not rowdy and lent itself well to conversation, as well as my futile attempts at flirting (although the owner-manager of the bar applauded me when I flirted with one of his bartenders). It was a great night, and I knew I’d want to come back at some point to continue besting strangers at Mario Kart.

Unfortunately, that looks highly unlikely at this point after the appalling lack of sensitivity I experienced at this bar on the evening of July 22.

Our group was of 8-9 people, so we reached the door of the bar in segments. We were all exiting our Uber in a manner that allowed us to manage the driest path through the figurative monsoon that had been falling down on DC for the entirety of the day. The three women in the first segment (none of which were the bride or had anything on them to indicate they were a part of a bachelorette party) were less-than-welcomed with a baffling scenario: they were told by the owner of the bar and his bouncer that the bar was closing… at 10:30 PM. Meanwhile, there were several people seated in the lower bar area and the bustling sounds of many more could be heard upstairs. Not yet sensing something was awry, one of my friends commented that she was bummed because she was looking forward to dancing. “We don’t do dancing,” said the owner. What?

Finally, the remainder of the group joined up and the bride, only marked by a “bachelorette” sash, showed up. This is when the owner said, “We don’t do bachelorette parties here. You can go next door to Dan’s Cafe.”

I was dumbfounded. It was pouring rain and my friends were apparently being denied entry to a bar because they were women. This became especially apparent when I went in the door to advocate for my friends who had just been thrown out into inclement weather; before I even mentioned anything, they asked for my ID, not realizing I was with them and intending to let me in… likely because I was a man. Instead, I asked the owner for an appeal to reason on behalf of my friends, and rather than having any kind of nuanced conversations with me about what had just transpired, he answered curtly, “I know you all have been drinking all day. You’re all way too drunk.” I could only stare with my mouth agape while shaking my head.

Not that I should have to justify myself, but let me give an outline of our day leading up to that point to illustrate that, no, my friends were not drunk and that, yes, my friends were just the victims of sexist discrimination. At 2 PM, we were at a winery closer to West Virginia than it was to DC. We were there for two hours before having to make the trek back to DC. No one was intoxicated or even remotely tipsy because we were making this journey through blinding flash floods and none of us were morons. There was approximately five hours of non-drinking that passed before we pregamed lightly while giving the bride presents before going to Adams Morgan at 10:30 PM.

At the end of the day, I understand that any business owner is entitled to refuse service for whichever reason they deem fit. And yes, a party of that size for such an occasion definitely merits the just consideration by the bar of “How much have these people had to drink and will they be a liability because of that?” However, this is far from the level of thoughtfulness that occurred in this situation, especially because the no-bachelorette excuse followed two outlandish claims (by, I repeat, the owner of the bar) that the bar was closing and that they “don’t do dancing.” (This is DC, not the Bomont of “Footloose”; there’s no way a gay establishment hasn’t realized that yet.) Otherwise, I expect that bachelor parties, both gay and straight, are also greeted with this rationale. Or birthday parties. Or any one of the plethora of gay sports team parties that encourage their participants to be drunk by 2 in the afternoon on a Sunday and are then out, clearly marked in their uniforms, til 4 AM on Monday.

And even if Pitchers decides it really wants to discriminate against women this way, the least they could do is preserve the dignity of the patrons they are denying from their establishment. DO cite concerns about general alcohol consumption in a thoughtful way (i.e. “Hey, congratulations on your engagement and wedding! We’d hate to put a damper on your evening, but since we have no way of knowing how long you’ve been drinking today and we want you all to have a good time, we unfortunately can’t let a large party of this nature in here to preserve the vibe of the evening”). DON’T throw a group of tiny women who were really looking forward to experiencing your bar out into a rain storm. DON’T lie to them about why they can’t come into your bar with faux reasons of closure and Calvinistic rules about dancing.

The kicker on this is that, as we were walking dejectedly into the rain, we were told quite patronizingly that we “should go to Nellie’s.” You mean, a bar that values inclusion and doesn’t try to disguise sexism with some bogus justification of fighting the good fight of preserving a gay safe space? Sure thing! We’d only have to swim there through the monsoon you’ve just thrown us into via your complete lack of sensitivity.

On the topic of preserving gay spaces in bars, I am well familiar with the various adages of “Make [“x” gay bar] gay again” and the situations that have arisen around the country to make people feel that way. I understand that the LGBTQ community feels at times put-off by the recent influx of people who would seek out bars of this nature for the novelty of it, re: “some bachelorette parties full of women who don’t want the stress of straight men so they instead just get drunk in a gay bar and objectify gay men to the point of treating them like hand bags” (this is essentially a paraphrase of several thoughts on this topic from a NYT article). And that is rightfully a concern. However, this was absolutely not an example of one such party, and particularly as a gay man, I am especially frustrated by this.

I can count on one hand the amount of gay men I consider my friends, and they can only be so present during the select times I feel up to visiting a gay bar. Luckily, I can count on more hands possible the amount of friends I have who are my allies that would be just as willing to go with me to a gay bar and help assuage my social anxiety and assist me in making some new friends. I firmly consider all of the women who were in this bachelorette party to be such people, but how can I truly express my gratitude to them when a place like Pitchers can essentially say “you are not welcome here” on the grounds that they are women (one of which even identifies as queer)? This whole experience was incredibly disappointing and embarrassing, especially because WE ONLY WANTED TO PLAY MARIO KART, and this sexist treatment of my friends by a gay business has caused me to look inward and think critically about how the LGBTQ community values our allies. It’s especially confounding that a marginalized community was returning discrimination in this scenario.

I will not go as far as to say that people should not patronize this business. Adams Morgan needs a gay bar of this nature, and I don’t doubt the role it plays in supporting the community (although with attitudes towards women like this, I’m inclined to think that this is not about to be a sorely-needed-welcoming place for queer women in DC’s otherwise slim offerings). And I am not suggesting that a gay business shouldn’t be mindful to the forces that inadvertently upset the balance between what makes a gay bar definitively gay and “not gay enough.” But perhaps there is a bar that is TOO gay, especially if a business is living only in 2018 and not being mindful of how utterly remarkable it is that the trend of straight people frequenting gay bars has been on a steady climb over the past decade. Look how far we’ve come – supporting the LGBTQ community is trendy now!

As a gay man, I owe so much to my allies, and I’m pretty certain the community as a whole feels the same, although their actions apparently betray that gratitude at times. I get it: gay bars historically exist to serve marginalized people who would otherwise have felt threatened, discriminated against, and unwelcome for being who they are in other places. But in 2018, if you as a gay man are really feeling that threatened by a group of eight tiny women with an affinity for Nintendo games, and if you feeling threatened manifests itself into actions of discrimination and sexism, you need to take a step back and think about who is really going to ruin the vibe of your bar.

(*Note, any use of the word “you” in this email are general uses, not to any one specific person.)”

Next
“On Wednesday, Aug. 1, the Smithsonian’s National Zoo will host a public meeting that will include a presentation about the Zoo’s perimeter fence and security plan and a Q&A”