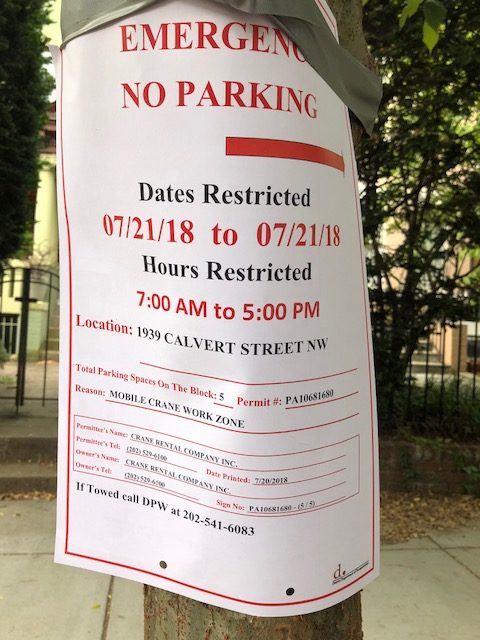 I wanted to alert my neighbors on the 1900 block of Calvert Street and the surrounding area that cars parked on the south side of the street were wrongfully ticketed and towed Saturday July 21st. “No Parking” signs were posted by a private mobile crane operator yesterday to install an HVAC unit this morning. The signs clearly indicated that they were printed on Friday July 20th, not the 72 hours in advance required by District law.

In addition, they cite the “No Parking” location as one house on the north side of the block, but the signs blanketed nearly the entire southern side of the 1900 block of Calvert where the cars were towed. Of course, DPW in its incompetence still ticketed the cars allowing them to be towed. I notified the mobile crane operator that they were towing the cars illegally and he acknowledged and asked which one was mine as if he had no obligation to every other car owner wrongfully towed. The operator took the signs down as soon as the cars were towed as if to remove the evidence.”