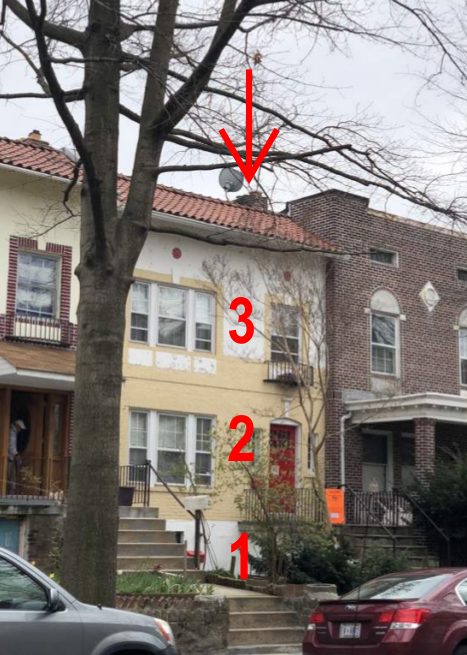 Advisory Neighborhood Commission (ANC) 1C/Adams Morgan, at its regularly-scheduled meeting on May 2, voted unanimously to oppose an attempt to increase the height of a residential building at 1766 Lanier Place NW. The proposed expansion requires the developers to get zoning relief, which is what brought the matter before the ANC.

The property is in an area which was “downzoned” in 2016, after residents successfully persuaded the DC Zoning Commission to change the area’s zoning designation (today called “RF-1”) so that buildings were limited to three stories of no more than 35 feet total.

The developers argue that the building, after expansion, will only be three stories tall. Opponents argue that, according to zoning regulations, the building should be considered a three-story building now, and that an upward expansion would create an impermissible fourth floor. The question is whether the lowest floor of the building, which is partially below street level, can be considered the first floor for zoning purposes. The argument is: the “sunken patio” area in front of the lowest level is wide enough for this level to meet the legal definition of a first floor.

In addition, the resolution approved by the ANC cites DC regulations which say that, in an RF zone district, (1) “roof top architectural elements” shall not be “significantly altered”, including “increasing its heights”, (2) additions “shall not … impede the functioning of a chimney”, and (3) additions “shall not significantly interfere with the operation of an existing solar energy system.” The proposed expansion of 1766 Lanier Place would do all three of these, the ANC resolution argues.

About item 3 above, Commissioner Wilson Reynolds (district 07) remarked: “Solar panels don’t do well in the shade.”

The matter now moves to DC zoning authorities. The petitioners, who did not appear at the ANC meeting, have requested that the matter be heard at a hearing on June 13.”