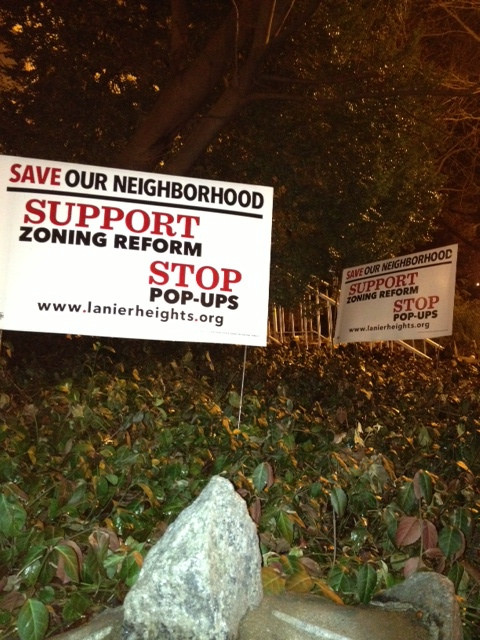 Last night the DC Zoning Commission handed neighbors a rare victory against untrammeled development when it voted 5-0 to grant a petition, presented jointly by Lanier Heights neighbors and ANC 1C, to downzone the bulk of Lanier Heights from R5B (which allows multi-unit apartment buildings) to R4 (which allows only row houses with a maximum of 2 units absent an unusually large lot size; normally, this means a home of several bedrooms along with an English basement).

The residents of Lanier Heights had overwhelmingly supported the proposal both out of revulsion at a series of ugly popups, which had overshadowed their row houses and deprived their gardens of light and air, and concern that breaking row houses up into apartment buildings of four or even more units meant that fewer families with children would be able to live in close-in neighborhoods. The neighbors testifying at the hearing elegized the mixed character of Lanier Heights, which has both apartment buildings and family-supporting row houses, while decrying the impact that popups, popbacks and cut-ups posed to the area’s diversity.

The Lanier Heights neighborhood organizing campaign was ably led by resident Denis Suski, who represented the neighborhood at the commission’s March 21 hearing. The campaign’s web site is at http://lanierheights.info/.

In a late development, the Office of Planning recommended approval of the proposal, in part because of overwhelming neighborhood sentiment and in part because a study of prices for units with one bedroom as opposed to units with three bedrooms suggested that the market was not meeting the demand for larger units. (Exhibit 127 in Zoning Case 15-09, which can be accessed by case number at https://app.dcoz.dc.gov/content/search/Search.aspx).

In explaining their votes in favor of the proposal, two commissioners went out of their way to say that, although they are generally skeptical of downzoning because of the critical need for housing in light of the fact that the District’s population is growing by 1000 per month, they found the presentation of ANC 1C, led by its current chair, Alan Gambrell, and its past chair, Billy Simpson, had been particularly persuasive. All the commissioners joined in their praise of the work done by the ANC.

One of the commissioners condemned the developers for their greedy attitude in trying to squeeze every last penny of profit out of their projects, to the derogation of neighborhood concerns, and two commissioners noted the absence of any support from either side for a compromise approach, which each of them had articulated during the March 21 hearing, that would have rejected downzoning in favor of some unspecified design review process. The Zoning Commission’s discussion of the proposal can be accessed here: http://ec4.cc/dfead5ece

Remaining to be decided is a text amendment to address non-conforming uses within the downzoned portion of Lanier Heights, and in particular to address development projects that were in the permit pipeline as of December 2015, when further projects inconsistent with R4 had been put on hold pending the hearing. Exhibit 129. The Commission voted last night to open a new zoning case to address this proposal from the Office of Planning. The ANC has gone on record opposing proposed concessions to the projects in the pipeline. Exhibit 130A.

A neighborhood celebration, possibly with live music from a band based in Lanier Heights, has been tentatively planned for Sunday afternoon.”