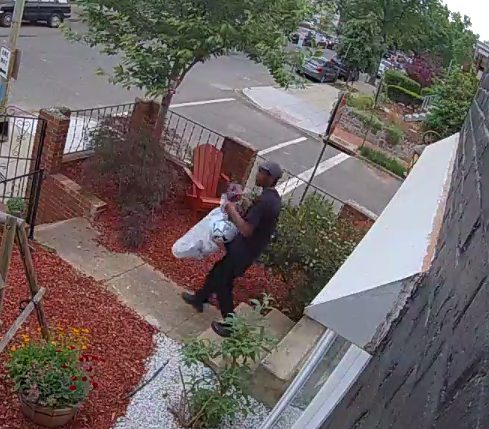 Captured a video of someone walking down the street with a bag full of goodies already, stopping in our yard to help himself to another package the UPS delivery guy stashed in the bushes. If anyone recognizes this guy please contact MPD where there’s a report already on file for him. (Oh and if you live in Capitol Hill and happened to have a package stolen Saturday afternoon, this might be your guy.)

Cops said they recognize him but haven’t been able to catch him in the act yet. He’s been known to become violent when approached, so call 911 if you see him rather than confronting.

Package was supposed to be delivered on Monday when I would be home all day, but for once it was dropped off early, which is usually a good thing but not in this case. Thankfully REI customer service is great and there’s no loss to me personally other than time.

I just realized last night after editing the clip that my video settings had been reverted to medium quality rather than ultra-HD, after a Nest OS update, so might want to remind people to constantly check their settings if they use Nest products. It would have increased my image quality significantly.”