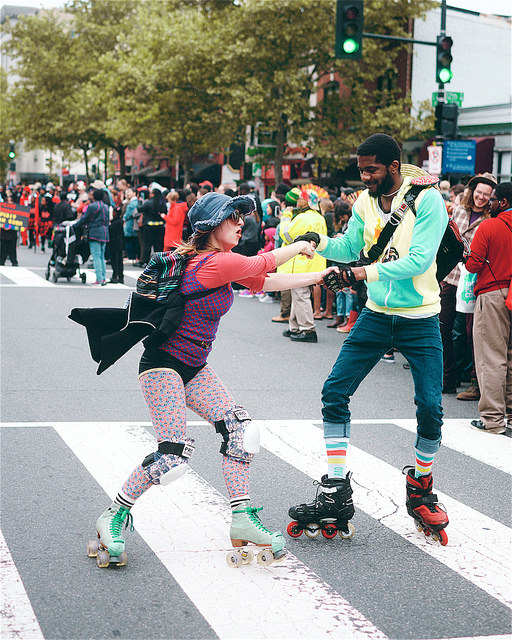 The 5th Annual Funk Parade will happen Saturday, May 12, after last-minute fundraising raised over $60,000 in just a few weeks. Organizers had announced March 6 the event was unlikely to take place because of a massive budget shortfall.

“Funk Parade has always been an event by and for the people of the city to celebrate what we love about D.C.,” said event co-founder Justin Rood. “Everyone who enjoys this event is grateful to Mayor Bowser, to the hundreds of individual donors and the dozens of local businesses who are making this possible.”

D.C. Mayor Muriel Bowser pledged an additional $25,000, which organizers said was essential to make the event happen this year. Residents have given over $20,000 in crowdfunding support the event, as well. Sponsorships from local businesses including Chuck Levin’s Washington Music Center, plus a commitment from the ridesharing service Uber, made up the rest.

“We are bringing the funk,” said DC Mayor Muriel Bowser. “The Funk Parade is a staple of our community, exemplifies the creative passion that exists across all eight wards, and we are proud to support it.”

Including this commitment from Mayor Bowser, this year’s event has received support from Events DC and city agencies including DC Commission on the Arts and Humanities and the Office of Cable Television, Film, Music and Entertainment.

“As the face of conventions, sports, entertainment and cultural events within the nation’s capital, Events DC is proud to support the Funk Parade and all the homegrown musicians who use this platform to showcase their talent,” said Gregory A. O’Dell, Events DC president and chief executive officer. “Supporting the Funk Parade as well as the many signature festivals within our nation’s capital support Events DC’s mission to enhance our diverse creative economy, foster
our entertainment scene and promote talented artists across the many iconic venues within the
District.”

As in past years, 2018’s event will feature not only the mighty Funk Parade but also a Day Fair of free performances throughout the U Street and Shaw neighborhoods. An evening music festival in over a dozen venues will follow, along with a ticketed showcase concert at the historic Lincoln Theater on U Street, featuring some of the best music talent in the District.

More announcements, including lineups, ticketing and more, will be made soon.

About Funk Parade
Funk Parade is the District’s largest volunteer-organized celebration of music, arts and culture. Founded in 2013, the event is produced by a collaborative network of over 200 arts and community groups, churches, youth organizations and nonprofits. It’s supported largely by contributions and in-kind donations from individuals and local businesses, as well as grants from city agencies including the DC Commission on Arts and the Humanities. The event is produced by All One City, a District-based 501(c)3 nonprofit working to improve civic engagement through arts and culture. Donations are tax deductible and can be made through the YouCaring crowdfunding platform. For more information about Funk Parade visit the event website at funkparade.com. More information about All One City can be found at the website all1city.org.”