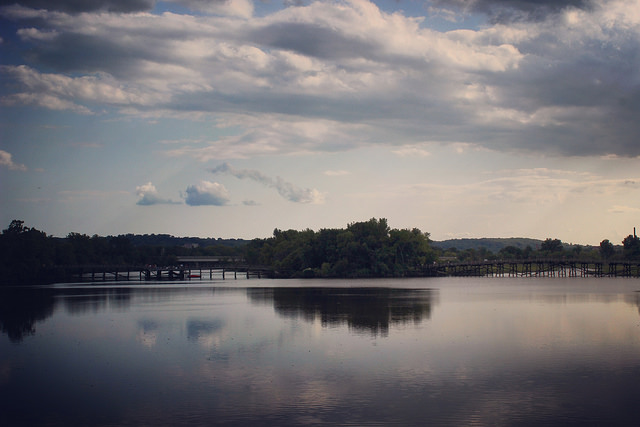 This is a long story. The important part is at the end, with the asterisks.

I regularly walk my dog on Heritage and Kingman Islands just off the RFK parking lot at Benning Rd. and Oklahoma Ave NE.

This evening at about 6:45pm I happened upon some kids at one of the clearings on the west side of the gravel road that runs down the center of Kingman Island, the larger of the two islands.

This clearing has a small curved sidewalk and some large boulders; it’s the second area like this north of the Pennsylvania Avenue bridge.

The kids were standing next to a wooden trash can, which had a good sized fire burning inside it.

I looked away for a second, then looked back up, and they were gone.

As I got closer to the clearing, I saw a large amount of grass had also been burning – I’d estimate about a 30′ x 30′ patch. The perimeter of the patch was still on fire, flames about 4-6” high.

I looked up at the ridge beyond the fire, and saw the silhouettes of two kids moving through the trees.

I called 911, and had a difficult time getting the dispatcher to understand the location of the fire – she kept insisting it was in Anacostia Park, despite my repeated descriptions to the contrary.

After a few minutes I finally explained it to her satisfaction, and figured the chances of me and my dog getting trapped on the island by this small fire in a relatively damp location were slim, so I headed to the southern end. I left my name and number with the dispatcher.

When I returned to the location, the kids were nowhere in sight, and the fire was dwindling, so I stomped out the rest of the flames and then kept walking north.

Then dispatch called me back, and I had to re-explain the location of the fire one more time for DCFD. I told them I could meet them at Benning Road to flag them down.

As I continued north I passed two kids standing by the picnic tables down by the river. I have no idea whether or not they were the same kids, but I hadn’t seen anyone else on the island other than the kids near the fire.

As I got closer to Benning, I saw that two Portajohns had been pushed over, and the doors to the white storage shed were wide open.

Now close to the road, in the garden next to the gate, a homeless guy was standing next to the green garden shed. He asked if I had seen some kids – I told him yes, and that I thought they had set a brush fire down on the island.

He said that they had attacked him, so then I called 911 again for MPD.

Then the whole rigamarole started over again – dispatch didn’t know where I was, and without an address they were stymied. I told them that the closest location was Benning Road and Oklahoma Ave. They asked if I would be there to meet an officer. I told them absolutely not: the officers are in cars, and they can head eastbound from the intersection and clearly see me on the side of the road, next to the large sign that says ‘Kingman Island’.

MPD showed up pretty quickly and questioned the homeless guy – turns out the same kids had messed with him a couple weeks before.

Then DCFD called me back, and said they were at the RFK parking lot entrance to the islands. I told them to come around to the Benning entrance, where there were now at least 4 MPD squad cars.

When I finally left, a DCFD firefighter was cutting the lock on the large rolling gate of Benning Road, I assume to get the fire engine down the road to soak what was left of the fire.

***POINT BEING: MPD and DCFD very clearly need to coordinate with whoever is responsible for Kingman and Heritage Islands to ensure that they (and dispatchers!!) know where it is, and to ensure that they can quickly gain access to either island in the event of an emergency. If someone had been seriously injured, the 20 or 30 minutes it took for first responders to get to the scene could have meant the difference between life and death.

People run and bike on the islands on a regular basis, so it’s a matter of when, not if, someone gets hurt down there and needs help.

Read more →
More Stories
Today’s Rental is a “Completely renovated 2 bedroom/2 full bathroom in a 4-unit historic row house.”“Shut Down 10 minutes after we ate there”