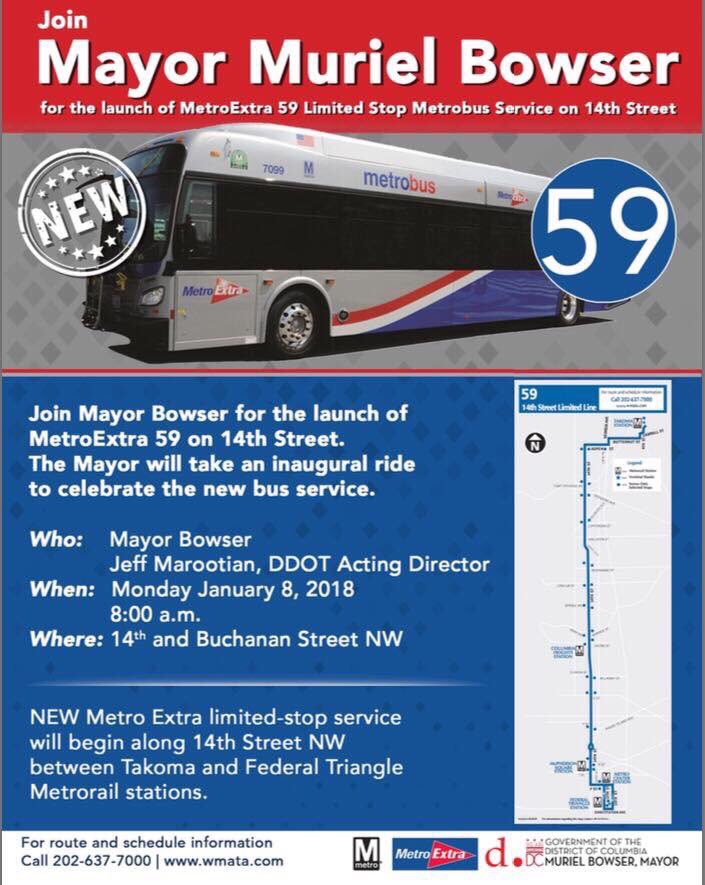 “Today, Mayor Bowser took an inaugural ride on the highly anticipated MetroExtra 59 Express bus route along the 14th Street NW corridor. This new service, which will help speed travel between the Takoma Metrorail station and the Federal Triangle Metrorail station and reduce crowding on buses along 14th Street, is part of the Bowser Administration’s ongoing efforts to work with the Washington Metropolitan Area Transit Authority (WMATA) to enhance service on Priority Corridor Networks such as 14th Street and connect activity centers across wards.

“Safe and reliable public transportation makes it easier for residents to get to work, school, and beyond,” said Mayor Bowser. “The 14th Street corridor has seen substantial economic development and growth, making it one of the most heavily traveled corridors in the District. As the District continues to grow, we’re going to continue finding ways to make it easier for our residents to share in our prosperity.”

According to WMATA, more than 15,000 average daily riders use this corridor every day.

The new MetroExtra 59 Express 14th Street bus line creates a new route to add to the existing 52 and 54 bus lines. This new route is expected to support the larger number of transit riders that have stemmed from the growth of businesses, which have nearly doubled over the last five years. The same area has seen the residential population grow by approximately 20 percent.

The 59 Express 14th Street Bus Line service will enhance route capacity and also improve service frequencies at stops served by the limited-stop bus. The new service will initially operate during weekday peak hours in both directions, running every 15 minutes. It will provide faster trips for the majority of riders on 14th Street who board and alight at MetroExtra stops.

The Mayor’s Fiscal Year 2018 budget included $1.2 million for the MetroExtra 59 Express bus route, a proposal endorsed by councilmembers and area neighborhood commissioners who recognize the importance of 14th Street as a major transit corridor. The budget also included funds to improve bus service reliability on the W4 Deanwood-Alabama Avenue route in Wards 7 and 8, which operates between the Deanwood and Anacostia Metrorail stations. Last month, weekday morning and afternoon rush hour trips were added between Congress Heights Metrorail Station and 49th Street and East Capitol Street to relieve overcrowding. Riders can learn more about additional improvements to Metrobus service on WMATA’s website.

Beyond the new line, the Bowser Administration is also developing measures to speed up buses along the 14th Street corridor in order to provide more reliable service for Metrobus and DC Circulator riders.”