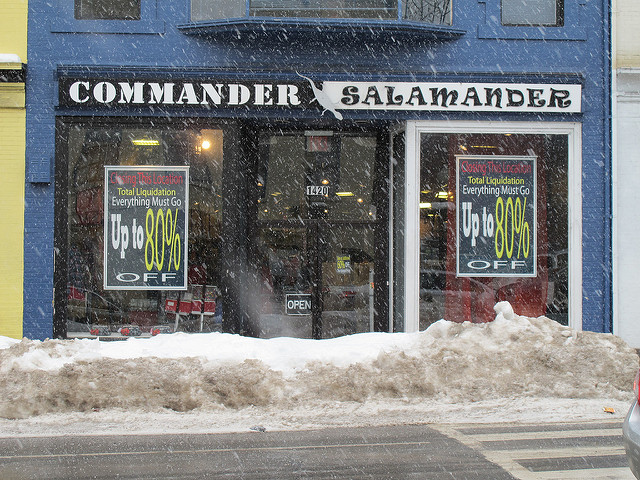 ANC2E Chair Joe Gibbons characterized “the meat” of the proposal: for every local block that is part of the District’s Residential Permit Parking (RPP) program, one side of the street will be reserved for local residents and guests. The other side will be “for anybody”. As it stands now, any Ward Two resident with a permit can drive to Georgetown and enjoy the benefits of on-street parking under the RPP program.

The proposal brought local businesspeople out to oppose the plan, which they claimed would drive away customers.

“This one side of the street parking, it would be a disaster,” said the proprietor of The Phoenix (1514 Wisconsin Avenue NW). This remark brought vigorous applause from some in the standing-room-only crowd.

Billy Martin, proprietor of Martin’s Tavern (1264 Wisconsin Avenue), said that potential customers already tell him they will not come to Georgetown because of difficulty parking, and the proposal would make the situation worse.

A third local businessperson predicted the plan, if implemented, would drive one-third of the businesses out of Georgetown.

In opposition, homeowners described the difficulties that they and their visitors had while trying to park near their homes.

The proposal discussed at the meeting was made by ANC Chair Gibbons and Commissioner Jim Wilcox (district 06). The ANC had scheduled a vote on the proposal, but pulled the vote from the agenda after objections. Particularly, commissioners and members of the audience pointed out that the ANC had a “parking working group” that had been discussing the problem.

It came out that the parking working group had been formed ten years ago and still had not made a proposal. Many at the meeting discussed the importance of consensus, but it seemed nearly impossible to come forward with a proposal that minimally satisfied all stakeholders, which (aside from residents and businesspeople) included Georgetown University as well as other schools and churches.

Other commissioners who were members of the parking working group objected to the Gibbons/Wilcox proposal and promised to come up with their own plan in time for the January or February 2018 meeting of ANC2E.

As of this writing, the District Department of Transportation (DDOT) is not authorized to change parking regulations in the manner discussed at last night’s meeting. However, last year, the DDOT proposed changes to existing regulations that will allow, under certain circumstances, residents-only parking zones. These changes have not yet been implemented.