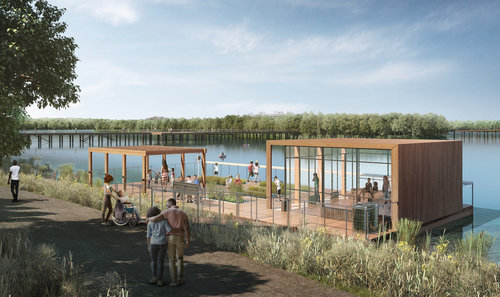 “A floating environmental laboratory is part of the DOEE master plan for the island. Image: DOEE”

From the Anacostia Waterfront Trust:

“Tell Mayor Bowser: Make Kingman Island a place for DC kids to learn about the environment!

Kingman and Heritage Islands, also known as National Children’s Island, are natural areas in the middle of the Anacostia River. For more than 50 years, plans have existed to make the islands educational and cultural spaces for District children and families.

In 2016, the D.C. Council asked the Department of Energy and Environment to produce a new planning study for infrastructure to provide environmental education for DC students on the island. A multi-sector team led by the prominent architectural firm Hickok Cole developed a phased plan, beginning with some basic amenities and leading up to the long-envisioned state-of-the-art nature center.

The District needs to take the lead in making this happen. This isn’t a mega-project like the $441 million Frederick Douglass Bridge or the $490 million Robert F. Kennedy Stadium campus renovation plan. The Department of Energy and Environment’s phased study estimated the cost for Phase I improvements, including outdoor classroom spaces, raised walkways, a floating lab platform, bathrooms, and a modest office and storage facility, at about $4 million.

The symbolism of doing something important for our children’s future in the middle of the river that has long divided us is unmistakable. So is the importance of working on a project that can unite us in these disturbing times.

Join us in asking Mayor Bowser to include the Kingman Island project in her Fiscal Year 2019 budget request to the DC Council. After 50 years, it’s time to finally transform Kingman and Heritage Islands into a place that makes a better future for DC’s kids.”