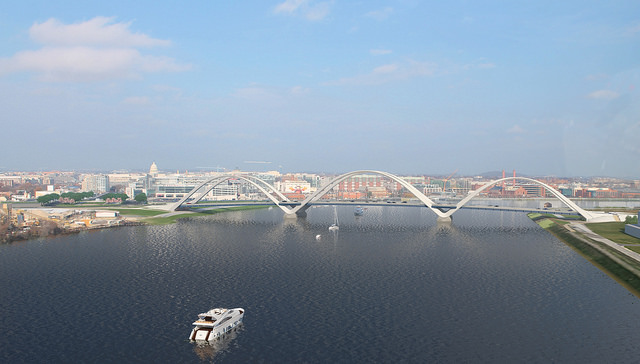 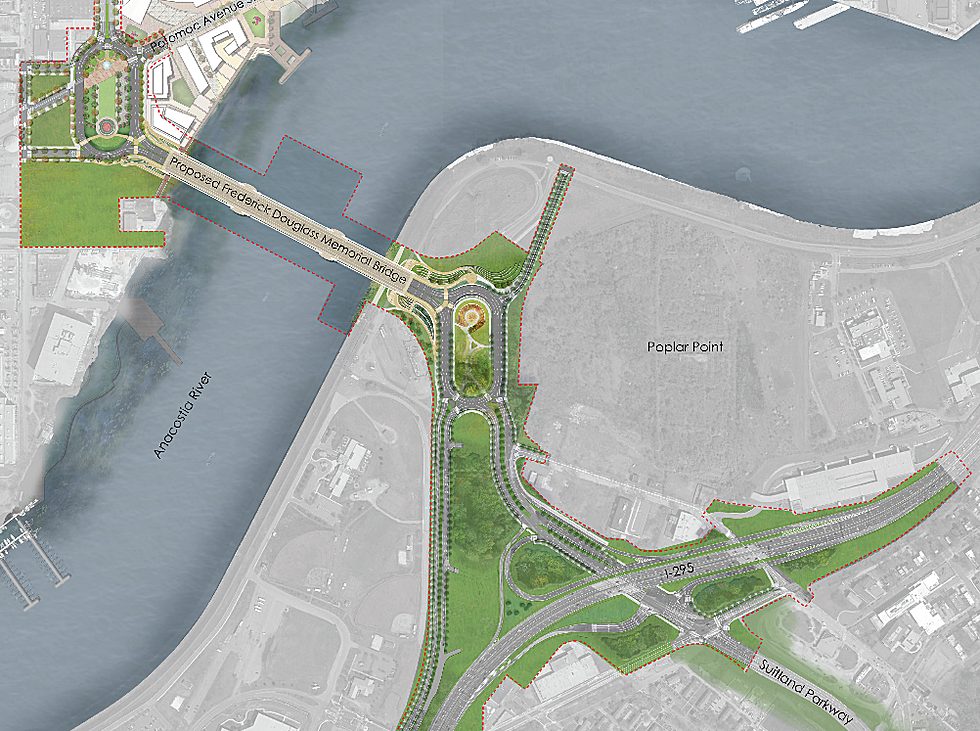 “Today, we are taking a huge step toward improving the District’s infrastructure and building a safer, stronger DC,” said Mayor Bowser. “The Frederick Douglass Memorial Bridge and the entire South Capitol Street Corridor Project will create jobs for District residents and provide an iconic gateway between Anacostia and Downtown DC. When completed, this will be a tremendous structure and a fitting memorial for a remarkable American icon.”

The new Frederick Douglass Memorial Bridge will be built approximately 100 feet from the current bridge. Other project elements include:

· reconstructing the Suitland Parkway/Interstate 295 interchange, which includes replacing the I-295 bridges over Howard Road, Suitland Parkway, and Firth Sterling Avenue.

In addition, the new bridge design includes three above-deck arches that capture the District’s arch history, two piers that will appear to float in the river, and four pedestrian overlooks.

“After fighting for more than a decade to secure more than $200 million in federal funding to build a new Frederick Douglass Memorial Bridge, what a relief it is to see that work come to a head with today’s contract announcement and design unveiling,” said Congresswoman Norton. “South Capitol Street is a vital gateway to the nation’s capital and a gateway to greater opportunities for DC neighborhoods east of the Anacostia River. As we prepare to commemorate the bicentennial of Fredrick Douglass’ birth next year, now is the perfect time to celebrate moving forward on this memorial bridge named in his honor.”

“The South Capitol Corridor Project promises to significantly improve the mobility of the more than 70,000 vehicles, bicyclists, and pedestrians who cross the Frederick Douglass Memorial Bridge each day,” said DDOT Director Leif Dormsjo. “The new bridge will simultaneously enhance the District’s transportation infrastructure, boost the local economy, and support the ongoing revitalization of the Anacostia Waterfront and development on both sides of the river.”

The South Capitol Street Corridor Project will be completed in two phases, and the District has signed a $441 million contract with South Capitol Bridgebuilders – a joint venture of Archer Western Construction, LLC and Granite Construction Company, with AECOM as the lead designer – for phase one of the project. HNTB is assisting DDOT with the program management and construction management.

The District achieved special Federal Highway Administration approval to require that the contractor ensure 51 percent of all new project-related jobs are performed by DC residents. Additionally, the contractor must subcontract at least 13 percent of the total contract value for design and 22 percent of the total contract value for construction to certified Disadvantaged Business Enterprises (DBE), far outpacing DBE goal setting for previous capital projects.

“I welcome the announcement of a design and contract award for the new Frederick Douglass Memorial Bridge, an important step in improving accessibility to the District of Columbia for Fifth District commuters,” said Congressman Steny H. Hoyer (MD-05). “I was pleased to help secure funding for the new bridge through the Congressional appropriations process. The South Capitol Street Corridor Project is vital to efforts to strengthen our local economy, and the new Frederick Douglass Memorial Bridge will help continue to revitalize the surrounding neighborhood. I thank Mayor Bowser for her leadership on this project, and I look forward to continuing to work with District officials to see this project to completion.”

The South Capitol Street Corridor Project is one in a series of transportation, environmental, economic, community, and recreation projects developed by the larger Anacostia Waterfront Initiative (AWI) Program. From the Tidal Basin to the city’s northeast border with Maryland, the 30-year, $10 billion AWI Program is transforming the shores of the Anacostia River into a world-class waterfront and enriching nearby communities.

Construction is expected to begin at the end of 2017 and last through 2021. For more information about the South Capitol Corridor Project and the new Frederick Douglass Memorial Bridge, visit newfrederickdouglassbridge.com. To learn more about the AWI Program, visit anacostiawaterfront.org.”