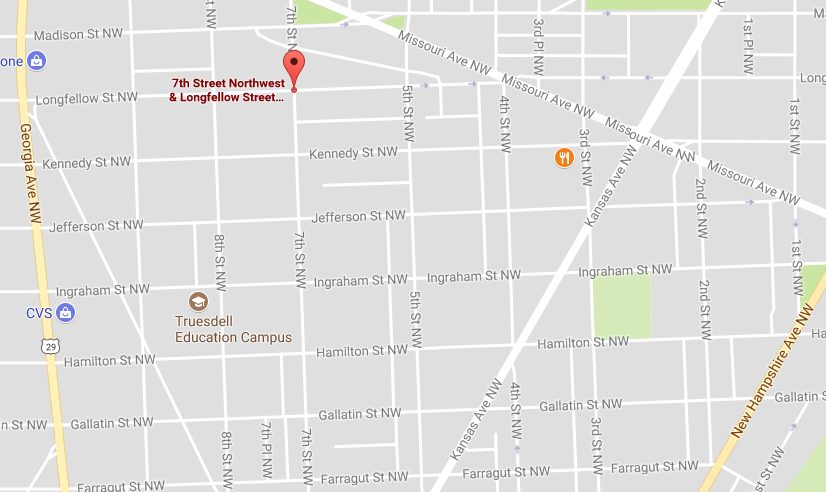 I live in Brigthwood on Longfellow b/w 7th & 8th Street. Last night around 11:10 my girlfriend and I heard ten gun shots go off outside our window. There were about 5 or 6 police cars patrolling the neighborhood and then what appeared to be police officers set up on Longfellow searching for shell casings. I searched news and mpd sources but didn’t see any mention of it. Just reaching out to see if anyone else has reported to you.”

On an MPD listserv a resident inquired:

“We heard 8 gunshots last night at 11:15pm around Emerson or Farragut and maybe 5th St. Is there any more information you can give us?”

“On November 13th, 2017, at approximately 11:12 P.M., Fourth District police officers were in the 700 block of Kennedy Street, N.W., when they heard multiple gunshots (6 shots) coming from the 700 block of Longfellow Street, N.W. The MPD Units immediately responded towards the gunfire and began canvassing the area.

While the units were canvassing, a victim called 911 and reported that a stray bullet had gone through his bedroom window and struck the bedroom wall in the 600 block of Longfellow Street, N.W. The victim reported hearing 5 gunshots, followed by a brief pause, then the sound of car tires screeching. Immediately after the victim heard the car speed away, he heard another louder gunshot which shattered his bedroom window and struck the bedroom wall. Fortunately, no one was injured as a result of these gunshots. Several other witnesses were interviewed, and reported similar accounts.

Moments after the Officers heard the gunshots, they observed a vehicle speeding westbound in the 700 block of Kennedy Street, N.W. The officers stopped the vehicle. The driver of the vehicle reported that he fled the area when he heard the gunshots. He stated that he did not see who fired the shots and he did not know where the shots came from. The driver was released after the officer’s completed their investigation.

The Metropolitan Police Department is asking anyone who has information regarding this offense to call the MPD Command Information Center at 202-727-9099.”

Read more →
More Stories
“I’m looking for the owner of a dog that bit my 12 year old daughter Saturday”For those still confused by Wawa-monium, Food & Wine has got you covered