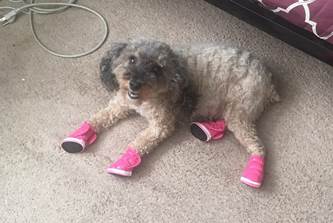 “Detectives from the Metropolitan Police Department’s Sixth District have announced that a stolen dog, by the name of “Diva,” has been located. The dog was stolen during a Robbery (Force and Violence) offense that occurred in the 5200 block of Fitch Street, Southeast on Thursday, August 3, 2017.

At approximately 9:25 am, the victim was walking three dogs at the listed location. Two suspects approached the victim. The suspects then grabbed one of the dogs, physically assaulted the victim, and fled the scene.

On Sunday, August 6, 2017, 21 year-old Tanisha Celestina John-Hope, of Southeast, D.C., was arrested and charged with Receiving Stolen Property. The stolen dog “Diva”, who is pictured below, was recovered and transported to the Washington Humane Society for an examination.

This case remains under investigation. Anyone who has information regarding this case should call police at 202-727-9099. Additionally, information may be submitted to the TEXT TIP LINE by sending a text message to 50411.”