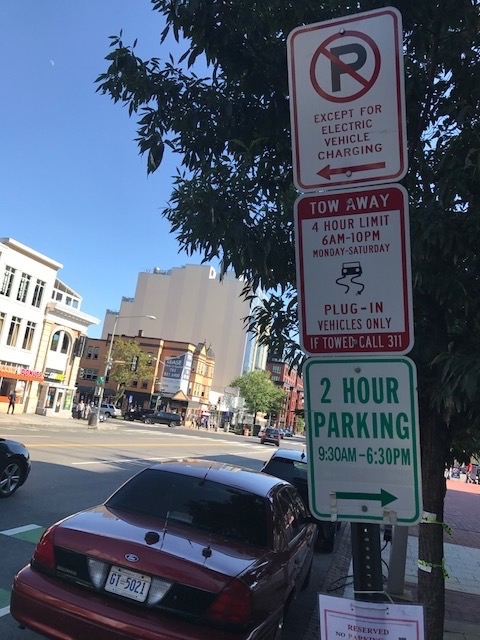 As a new resident of DC, I was thrilled to learn of the charging station on 14th, at U street, directly in front of the Municipal Building. It’s a pretty popular spot, so I always check my app to see when the charging unit is not in use before heading over to charge.

I went over this past Saturday morning at 6:45am, and saw this car parked in the clearly defined space.

Last time I checked, this model Ford was NOT an electric vehicle.

As luck would have it, there was a cop across the street getting coffee at Dunkin Donuts. I walked over and told him about this car in the wrong space. As you can see from the picture above, the arrow defines​ a very small space for one car to charge. Forward of that space is a bus loading zone, so you can’t legally park there, even though the charging cord would stretch to fit. Around 7AM, the cop wrote a citation on the car.

I thanked him and immediately called 311 to go about the process of having the car towed. I went to another part of town to find a charging station and run a few errands. Around 2pm the same day, I walked past and noticed the car and citation were still there. I called 311 AGAIN and they assured me it would be taken care of. I went back at 7pm and it was still there.

Flash forward to yesterday around 5pm when the car was STILL PARKED in the same space. I called 311 again and she transferred me to someone at 911 who handles those calls on Sunday. While the lady on the phone was very helpful and understanding, she informed me the city doesn’t tow cars on Sundays. She asked me for the license plate of the vehicle.

That’s when she said “You could normally call a towing company on your own, but since this is a DC Government vehicle, they won’t tow them.” She ended the call by saying it would be towed today. Here’s my take – I doubt it will be towed today, because what likely happened was an employee in the Municipal Building decided they would just take this VERY CLEARLY marked space for themselves over the weekend. They know they are in a DC Government car, and likely knew no one would do a thing about it.

Don’t get me wrong, I am totally loving my new city of DC, but it really lacks EV charging stations, so the fact that this person would feel so entitled to just call this space their own, really pisses me off.”

more stories
Previous
Your Afternoon Animal Fix
Next
“Suspicious package on G between 12th and 13th. Block cordoned off and waiting for bomb squad.”