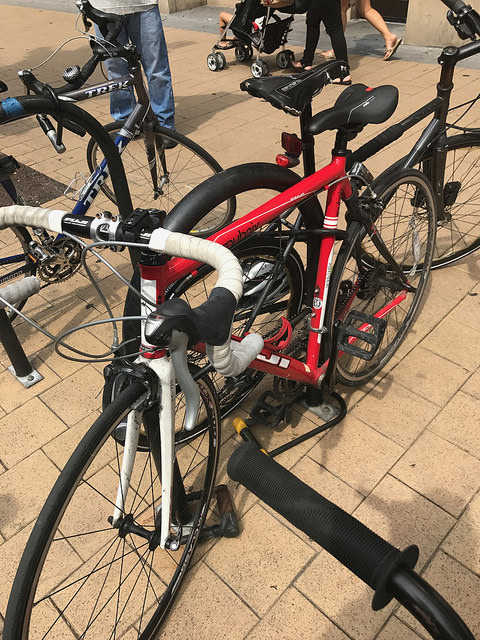 Hey, my wife was on her way to work and stopped to grab a coffee at the starbucks in CH on 14th st when she came out and found someone had locked their bike to hers. She spoke with the cops and fire dept., all of whom understandably said they couldn’t do anything. Hopefully it is just a mistake and when I check on it after work I’ll be able to unlock hers and ride off with it (I’ll have her lock keys). Worst case–someone is trying to steal her bike, locking it down and waiting until later tonight to grab it. When I stop by after work–assuming the errant bike is still locked to hers–does anyone have any suggestions? Cops said to buy some bolt cutters at ACE and use those on the offending bike, taking whatever consequences may come… I’m game. Any other suggestions? If some jag off is trying to steal her bike, then I’m fine dismantling their lock to get to her bike. If some doofus locked their bike to hers by accident, well, losing a bike lock is a small price to pay for their error…”

more stories
Previous
“a 6-inch pipe on or at the roof level burst, damaging maybe 3/4 of the apartments”
Next
Today’s Rental has a “sitting garden with community gas grill and 1/2 priced Wi-Fi from DC Access”