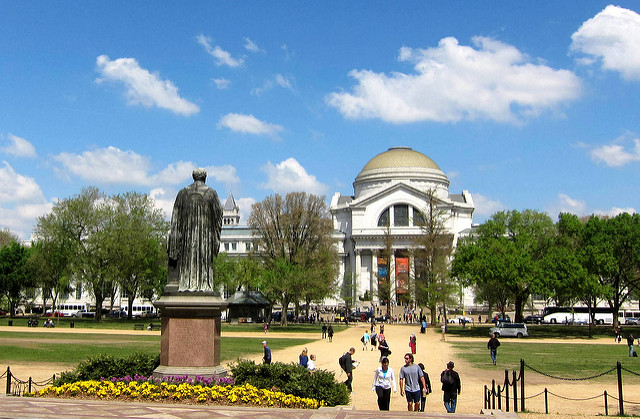 “Some of the world’s most prominent IMAX documentary filmmakers are leading a charge to oppose the Smithsonian National Museum of Natural History’s plan to demolish its IMAX theater in order to expand a cafeteria. In a public letter, the filmmakers have asked the museum’s Executive Director Dr. Kirk Johnson, to delay the demolition in order to engage in a transparent and public dialogue on the decision, including a full financial disclosure of the IMAX theater as well as the rationale for the proposed cafeteria expansion and its expected revenues.

The Samuel C. Johnson IMAX theater at the National Museum of Natural History has been a staple on the National Mall since 1999 and is an educational resource for the hundreds of thousands of visitors, including teachers and schoolchildren who visit each year. The theater is the only space in Washington, DC dedicated to showing IMAX films about the natural wonders of the planet and the challenges faced in protecting them.

“As filmmakers, we seek to offer experiences that educate and inspire,” said Jonathan Barker of SK Films and Producer of Amazon Adventure 3D and Flight of the Butterflies. “Particularly at the Museum of Natural History, our films play a powerful role in shaping the next generation of conservationists and environmentalists. Demolishing the IMAX theater would be the end of a vital educational tool and sends an unfortunate message that we value food courts over educational experiences.”

The group of filmmakers includes an impressive roster of producers, directors, and other industry professionals whose collective body of work has over $1 billion in global box office sales. Signatories include the renowned Producer and Director Greg MacGillivray whose credits include National Parks Adventure, Everest, and Grand Canyon Adventure; Producer and Director Toni Myers, well-known for her work on Under the Sea and Space Station 3D; and Producer Dominic Cunningham-Reid whose work includes Jerusalem, Journey to Mecca, and Superpower Dogs.

The museum plans to screen its last IMAX film by October 1st of this year. Read the full letter here and visit SaveOurIMAX.org or Twitter (@SaveOurIMAX) and Facebook for more information.”

Read more →
More Stories
Update: Homicide. Man Shot in Alley near Starburst Intersection of H“Thus far in 2017, there have been 77 condos settled over $1.2 Million and above.”