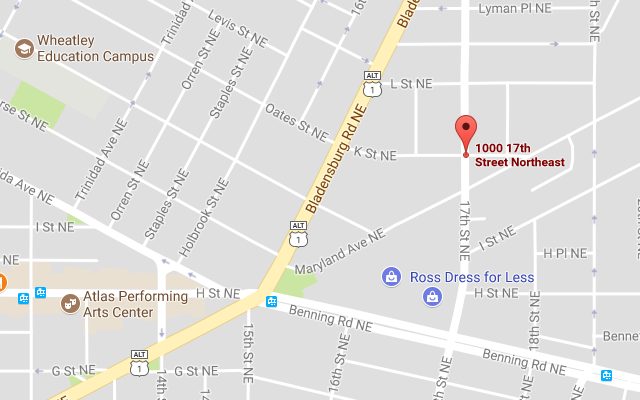 From MPD around 2am:

“The 5th District is working a confirmed Shooting which occurred in an alley near the 1000 block of 17 Street, NE. Adult Male suffering from Multiple gunshot wounds to his body. At this time there are no lookouts of any suspects. Any information please contact 2027279099”

“Detectives from the Metropolitan Police Department’s Homicide Branch are investigating a fatal shooting that occurred in the 1000 block of 17th Street, Northeast, on Thursday, July 21, 2017.
At approximately 10:51 pm, members of the Fifth District responded to the rear alley of the listed location for the report of a shooting. Upon arriving on the scene, members located an unconscious and unresponsive adult male victim. The victim was suffering from multiple gunshot wounds. DC Fire and EMS responded to the scene and transported the victim to a local hospital, where he was pronounced dead.

The decedent has been identified as 26 year-old Marcus Stephens of Oxon Hill, Maryland.
The Metropolitan Police Department currently offers a reward of up to $25,000 to anyone that provides information which leads to the arrest and conviction of the person or persons responsible for any homicide committed in the District of Columbia. Anyone with information about this case is asked to call the police at 202-727-9099. Additionally, anonymous information may be submitted to the department’s TEXT TIP LINE by sending a text message to 50411.”