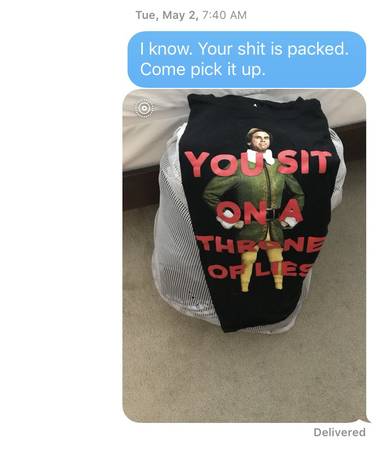 Today from the Craigslist tree (thanks to Riya for sending):

I got my boyfriend Barcelona tickets for when they play Man U for his birthday. I paid over face value because he was SO excited and we just HAD to go, and what kind of girlfriend doesn’t take that hint? Fast forward a few weeks to when I found out about his other girlfriend.

I was going to let him keep the tickets if he at least paid for mine, they were a gift after all and I knew what seeing his team in person meant to him. However, he’s being a child, won’t face me, and is telling people I’m crazy which really doesn’t fly with me.

Please help me get my money back, I already wasted time with this guy. The game is even on MY birthday, seriously this is just hilariously cruel. The tickets are listed as obstructed view, but you can see the entire field! (http://aviewfrommyseat.com/photo/8703/FedEx+Field/section-229/row-20/seat-20/)

Help a girl out!!

P.S. Brandon – Cheating on a woman, telling her it’s all in her head when she asks if everything’s okay and says that something feels off, leaving her go to two weddings alone totally wasting the RSVP her friend’s paid for, and not having the decency to face her and own up to what you did is crazy. Her saying to come get your neatly packed shit is not crazy.