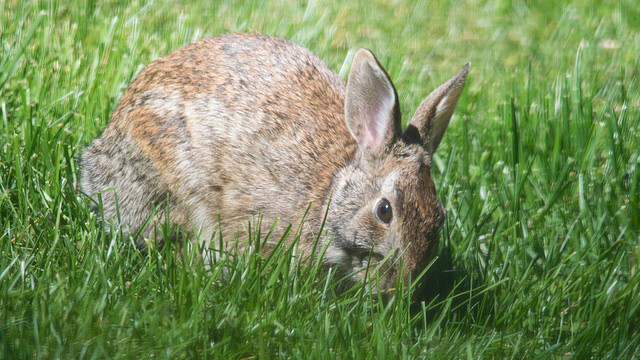 I took a walk down Upton Street, NW, a street so leafy and manicured it took a few minutes to figure out what – exactly – city I was in.

Did I accidentally end up in Decorah, Iowa? Am I on a golf course? Oh wait. That’s right.

Really, expensive, delicious, ah-mazing lawns: $1.5 million for a four bedroom that doesn’t even have a pool.

And the bunnies are everywhere.

It’s one of those neighborhoods that are proliferating throughout Washington. This one is in NW now but can also be seen in many other parts of the District.

This is what the nation’s capital is becoming, isn’t it?

Because, to be honest, I can’t afford to take a walk and stop every five feet and say “oh what a beautiful rabbit”. And neither can many city wildlife who have been here much longer than I have. Because animals can’t talk. Obviously.

Just last week, we heard a report baby eaglets have been born in Washington, D.C. In the wild. Yup. Eaglets will be living large in the land of million-dollar condos and wild bunny rabbits.

And gentrification circa 2017 in Washington has a distinct look to it.

Because it’s not just that fancy people have moved in with their fancy things. It’s the bunny rabbits, hawks, eaglets and even owls that are flying around with no thought at all to the squirrels.

Bunnies and hawks aren’t displacing the squirrels. No, the way it happens today is: The hawks eat the squirrels — in a sort of feel-good gentrification that makes gardening easier but life inaccessible to the very wildlife who have lived here their whole lives.

See, we’re not getting rid of your wildlife, we’re just reinventing it.

Washington has become a place where mice, roaches, rats — staples of regular city wildlife — have been seized, crafted and fancified.

I am totally guilty of coveting twee bunny rabbits.

Ten years ago, I waited 45 minutes at a rabbit cafe in San Francisco. My friend who lived there told me about these ah-mazing bunnies that I had to pet, so I went.

And I pet a bunny that was very soft. Later I cried at the memory. I don’t really know why but I thought it was important to share.

Let me ask you a question: Have you ever pet a squirrel? Don’t you think their fur is soft too?

Here’s an idea – an ah-mazing idea – why doesn’t someone open a squirrel cafe?

I’ve never heard of one before but I can promise you one thing – it would be ah-mazing.

So I weep for the past, I pine for the future but at the end of the day – can’t we just remember to turn off the lights before we go to sleep.

Ed. Note: For those who have no idea what I’m talking about – here ya go.