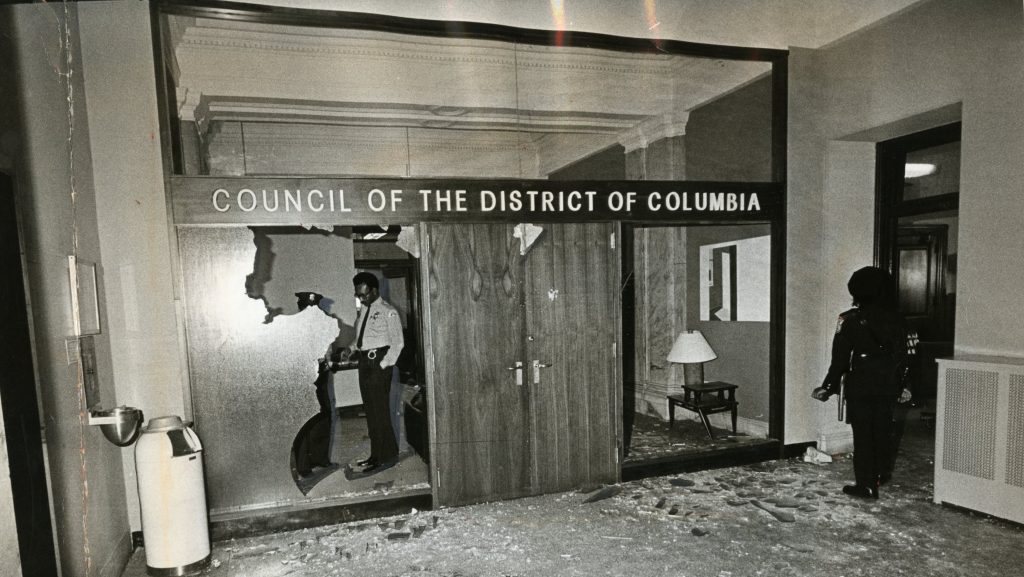 “The event is free and open to the public, no RSVP needed.

On March 9, 2017, the Council will remember one of the most terrible days in the District’s history, 40 years later.

The 40th Anniversary commemoration will consist of two parts. The first will be a panel discussion among participants in the 1977 drama. Pat Collins, who himself covered the incident for Channel 9 at the time, will lead a discussion among these panelists (listed with their 1977 titles):

The panelists will discuss the earlier 1973 mass murder that motivated the 1977 perpetrators, the experiences the hostages faced, their first-hand memories of the three besieged buildings during and after the crisis, and the subsequent trial of the hostage takers.

The panel discussion will be held on March 9 at 6PM in the John A. Wilson Building, 1350 Pennsylvania Avenue, NW. Enter the building via the rear (D Street) entrance.

The photo exhibit will primarily focus on the siege of the Wilson/District Building. It will be presented in the hallway outside the Council Chamber where much of the siege activity occurred. A number of the photos have not previously been published. When possible, photos will be displayed in the exact location they depict.

About the Hanafi Siege

On March 9, 1977, a dozen gunmen seized control of the Wilson/District Building, the B’nai B’rith International headquarters, and the Islamic Center of Washington. They took nearly 150 people hostage.

The leader of the hostage-takers was Hamaas Abdul Khaalis, a former national secretary of the Nation of Islam who broke with the organization to found the Hanafi sect. A year after Khaalis published statements critical of the Nation of Islam in 1972, gunmen stormed Khaalis’ 16th Street home (purchased for him by basketball player Kareem Abdul Jabbar) and killed seven people, including five of his children and his nine-day-old grandson.

In taking the hostages in 1977, Khaalis demanded the perpetrators of the crimes against his family be turned over to him. He also demanded that a film called “Mohammed, Messenger of God,” thought by some to be sacrilegious, be pulled from theaters. Finally, he sought reimbursement for the $750 contempt of court fine assessed on him for his outbursts during the trial of his family’s killers.

Khaalis sought intervention by many on his behalf, including Kareem Abdul Jabbar and Muhammed Ali, In the end, however, a critical role was played by the ambassadors from Egypt, Iran, and Pakistan, who helped negotiate the eventual surrender by the Hanafis. They were later tried, convicted, and sentenced to long prison terms. Khaalis died in 2003.

We must never forget the victims of the Hanafi siege: WHUR Radio reporter Maurice Williams and security guard Mack Cantrell. Williams was shot dead as he exited the elevator on the Wilson/District Building’s fifth floor. Cantrell was shot at this same location, and died days later of a heart attack in the hospital.

“Life judged Maurice by the measure of the love he shared with his colleagues, his teachers, his fellow students, and his family. Life judged him with patience according to the measure of his honest reporting.” [Quote from a eulogy of Williams, inscribed on the plaque hung outside the Wilson/District Building’s press room, later dedicated in his memory]”