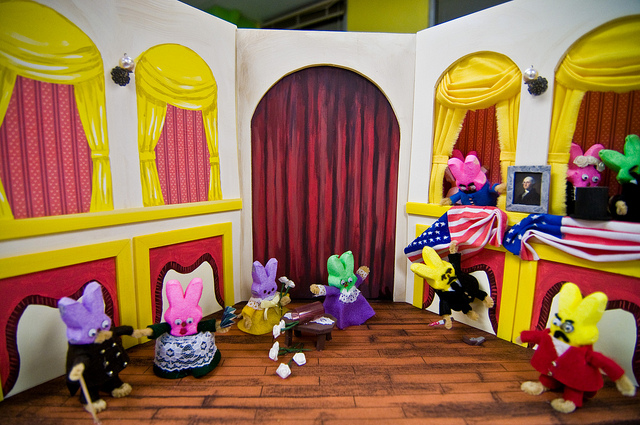 Update: With props to JCH for the title, The PoP Peep Project is launching April, 2017. Send me photos of your peeps in classic PoPville situations to [email protected]

“For 10 years The Washington Post featured a Peeps contest, in which people from all over created dioramas depicting scenes that reflected the country as they saw it, but populated with marshmallow bunnies and chicks.

Hard journalism this was not, but for us the contest offered its own sweet rewards. As fewer submissions began to come in, though, echoing the decline in readership of this feature, we knew that it was time to let bunnies be free again, and we have ended the Peeps contest run.

For now, another long tradition, the Post Hunt — the wacky brainchild of Dave Barry, Gene Weingarten and Tom Shroder — won’t be found this year in these pages or in the streets of Washington because the Hunt couldn’t get a sponsor.”

And Props to DCist’s Rachel Kurzius who came up with this terrific title when she first posted the news before it was confirmed by WaPo Editor’s Note:

“Without A Peep: Post’s Epic Diorama Contest Is Hanging Up Its Marshmallow Hat”

Ed. Note: It’s not so much the marshmallow hat part but the “Without A Peep” part that I thought was genius.

More Stories
Today in Hawks around Town – Upper Senate Park and some Turkey VulturesSelling Your Home in DC or Beyond? Save $20,000 Using Homezen