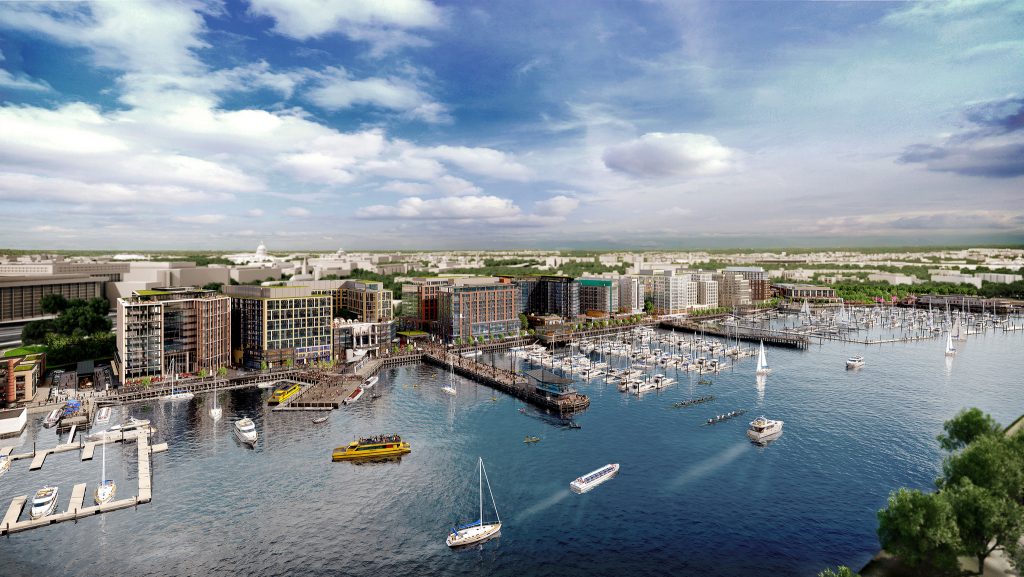 general rendering of The Wharf not specific to Phase 2

“Hoffman-Madison Waterfront (HMW), the developer of The Wharf, a $2 billion, mile-long neighborhood located on DC’s Southwest waterfront, today announced the architects and designers selected to design Phase 2 of the site.

The eleven architects comprise one of the most impressive lineups in the nation to design the ambitious second phase of The Wharf. When complete, Phase 2 of The Wharf will feature an additional 1.2 million square feet of mixed-use development including office, residential, marina, and retail space, as well as parks and public spaces, across an approximate half mile of waterfront.

Phase 1 is scheduled to open in October 2017. The groundbreaking for Phase 2 will take place in mid-2018, with an expected completion date in 2021.

“It is extraordinarily exciting to be able to announce the team we have selected to design Phase 2 of The Wharf,” said Shawn Seaman, AIA, Principal and Senior Vice President of Development of PN Hoffman. “We have selected a diverse group of locally, nationally, and internationally renowned designers, knowing they will bring their talent and expertise to The Wharf, building a waterfront neighborhood that is an integral part of the city.”

“As with everything connected to The Wharf, the architectural design team chosen for Phase 2 reflects our ongoing efforts to achieve excellence while creating a dynamic, authentic, and compelling community,” said Peter Cole, Managing Director of Madison Marquette.

District-headquartered Perkins Eastman DC, the master planner and master architect of The Wharf will continue this guiding role for Phase 2, channeling the collective vision to ensure that The Wharf is a beloved waterfront neighborhood for generations to come. The design firms selected for Phase 2 of The Wharf include:

Perkins Eastman is serving as master architect for The Wharf, continuing on the original master plan and development vision conceived by Principal Stanton Eckstut, FAIA. Eckstut will continue as the master planner for the waterfront neighborhood’s overall look and feel. The international design firm’s DC office began working with HMW on The Wharf in 2008, additionally serving as the Architect of Record for The Channel apartments and the Class-A office building, 800 Maine. Perkins Eastman DC is the horizontal architect for all Phase 2 infrastructure and underground parking—the largest scope in Phase 2.  Perkins Eastman’s portfolio encompasses all scales of the built environment, including resilient waterfront developments, healthcare, hospitality, K-12, multi-family residential and other critical infrastructure. Notable waterfront projects include Battery Park City, New York; Inner Harbor East, Baltimore; and Huishan North Bund, Shanghai.

SHoP has been recognized as Fast Company’s “Most Innovative Architecture Firm in the World” and awarded the Smithsonian/Cooper Hewitt’s “National Design Award for Architecture.” They will design two office towers and related retail space in Phase 2. No stranger to waterfront projects, SHoP designed the multi-use Pier 15 East River Waterfront project, and is completing construction for Pier 17 – the re-visioning of New York’s Seaport District. SHoP is an innovation leader in modern office design and is currently designing the 423,000 sf Uber Headquarters in San Francisco and locally, the 1,000,000 sf Midtown Center project on the old Washington Post site.

This DC-based CBE architecture firm will be collaborating with SHoP on Parcels 6 and Parcel 7 as the Architect of Record. WDG provides architecture, master planning and interior design from their offices in Washington, DC, and Dallas, TX. Their award-winning work can be found in major metropolitan areas around the United States as well as overseas. WDG has produced more than 500 major buildings, including commercial office, multifamily residential, hospitality, higher education, and mixed-use projects, since their inception in 1938. Current notable projects include Westlight and Midtown Center. WDG has been active in Phase 1 of The Wharf as the Architect of Record for the VIO condominium residences and Incanto apartments that will be delivered in 2017.

This young and creative architecture firm will design the mixed-income apartments and related retail slated for Parcel 8. Since its inception in 2007 ODA has quickly become one of the most recognized firms of its generation after garnering a reputation for its imaginative and mold-breaking designs, like the National Library of Israel, the adaptive reuse of 15 Union Square West, or Hunters Point South, the award-winning biggest affordable housing project in New York City in the last forty years. ODA’s projects have been praised for their social responsibility, design innovation, and are setting a precedent for a contemporary urban life—integral assets to The Wharf. ODA strives to divert the perspective of dwelling and over time influence the city, searching of the best practices to develop a new paradigm that puts people first.

Now in its 20th year, Morris Adjmi Architects is one of the most prolific firms in New York City, with a rapidly growing national presence. Adjmi’s work is known for its thoughtful engagement with history, modern interpretation of industrial forms, and creative use of materials. Parcel 10 will be his first commercial office building in DC, but Adjmi has already earned recognition in the District for the innovative Atlantic Plumbing residential development. His previous commercial projects, including flagship locations for Theory and Samsung, have helped define emerging neighborhoods and revitalize historic districts.

STUDIOS Architecture opened their Washington, D.C. office in 1985 and is an industry leader in civic, mixed use and workplace design. STUDIOS numerous awards for base building design, innovative jewel-box projects and world-class office projects are a testament to the firm’s versatility.  The firm is known for seamless integration of base building with interior spaces that elevate the use of the building and will bring these skills to the multi-use marina services building.

Hollwich Kushner is a leading architecture design firm based in Lower Manhattan and winners of the prestigious MoMA/PS1 Young Architects Program where they built Wendy. Recently the firm has gone on to design projects of varying typologies for clients including Vornado, WeWork, Uniqlo, and the University of Pennsylvania. Hollwich Kushner is a new kind of architecture firm – they are entrepreneurs who founded Architizer.com and Architects who believe that buildings are best when they have rich personalities. Hollwich Kushner. Shape Tomorrow.

Inspired by the power of landscape architecture to deliver beauty in its many forms: rational, lyrical, and exuberant, MVVA will design the outdoor space at The Wharf called M Street Landing, an open space that connects the waterfront to Arena Stage. The MVVA team believes that the most meaningful landscapes anticipate what they will mean to their many audiences and emerge from straightforward, elegant problem-solving techniques. MVVA has used its skill and technique in its designs for Hudson Park and Boulevard, the centerpiece of a new neighborhood for midtown Manhattan’s far West Side known as Hudson Yards, and, the much-admired Brooklyn Bridge Waterfront Park.

Charlottesville-based Wolf | Josey Landscape Architects has worked on various landmarks in the DC-area.  Partners Mary Wolf and Paul Josey have led the design of notable landscapes including the Asia Trail at the National Zoo, Waterfront Park and Phase 1 of The Wharf. While working with Perkins Eastman on the first phase of The Wharf, Paul Josey led the planting and detailing of The Wharf Promenade and ground level public space as well as The Channel rooftop.”