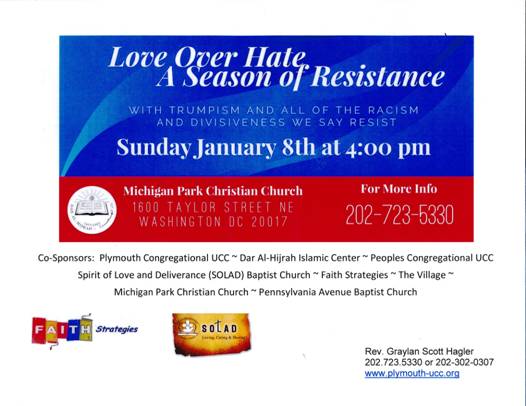 “On Sunday January 8, 2017 at 4 pm at Michigan Park Christian Church, 1600 Taylor Street, NE (the corner of S. Dakota and Taylor, NE) leaders of the Interfaith community will come together to affirm “Love Over Hate: A Season of Resistance.” This service and rally is in direct response to the divisiveness and rancor that has been offered in the current political climate in the nation. The Clergy leading this call to resistance are clear that it doesn’t have to do with a candidate winning or losing, but the fact that a sacred social covenant has been broken where those who are considered “Other” have been castigated, threatened, and endangered.

Leaders from the Christian, Muslim, Jewish, and Social Justice communities will stand together in solidarity to issue this call. There will be immigrant rights organizers and workers in attendance and speaking. There will be a call to stand up and oppose the Sessions nomination.”