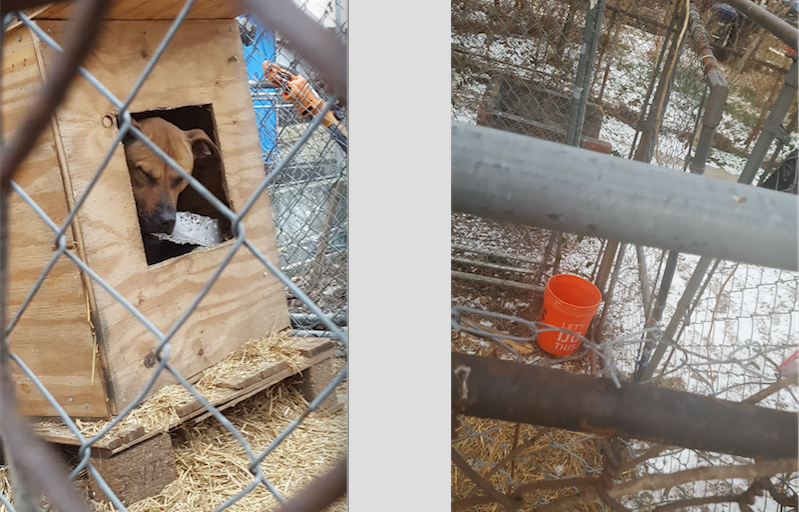 Update from The Humane Rescue Alliance:

“The Humane Rescue Alliance and our humane law enforcement team has been actively monitoring the dog on Randolph Street and until today we were in regular contact with the dog’s owner. It is our understanding that the owner of the home where the dog was being sheltered was arrested this afternoon (apparently unrelated to the animal). The owner of the dog has subsequently removed her from her outdoor shelter and we are trying to determine the whereabouts of the dog and her owner.

As difficult as the video was to watch, people should understand that this situation with the dog’s shelter does not violate District law; the dog had shelter, in a wooden structure that is raised with straw bedding; the dog was being fed and given water.

Because this did not violate the law, we were limited as to what actions we could take. People should rest assured that when laws are violated, we seize animals. In fact, during this past weekend, we have seized two dogs from two different locations who were being kept outside without proper shelter. We constantly advise pet owners to bring their animals inside during extreme temperatures, and urged this dog’s owner to do just that repeatedly. We are continuing to closely monitor this developing situation.

Many of you are aware of the neglected dog that is kept outside 24/7 year round in a small pen in the backyard of the 1300 block of Randolph Street, NW. It is 23 degrees outside and snowing, and she is still there- shivering and shaking in the cold. A few of us have reported this situation repeatedly, and have been given conflicting information from Humane Law Enforcement regarding the level of care the owner is legally required to provide.

DC Code § 22–1001 (a) (1) states that, “Whoever knowingly…or unnecessarily fails to provide…proper food, drink, air, light, space, veterinary care, shelter, or protection from the weather, shall for every such offense be punished by imprisonment in jail not exceeding 180 days, or by fine not exceeding $250, or by both.”

I don’t how the wooden box, even with straw bedding, but lacking any heat source or even windflap to keep cold/precipitation out, suffices as “shelter, or protection from the weather”. There is no way that the temperatures in that “shelter” are above freezing.

Please help us end this animal’s suffering by calling to report this cruel and neglected situation. The phone number for the Humane Rescue Alliance/Humane Law Enforcement is 202-576-6664. You can leave an anonymous report if you do not wish to leave your name.

Update: We continue to be informed that HRA/HLE’s hands are tied, and the best way to help out is to pressure the Mayor, Council Members, and maybe HRA’s Board of Directors and even Rep. Eleanor Holmes Norton to fix this situation today.”

Another reader reports: “The photos above are from this morning [Monday] at around 8:30, 17 degrees. There’s a citation notice of some sort taped to the pen, but considering it’s still there from when HRA visited yesterday afternoon, I am doubtful anyone at the residence has a) seen it or b) done anything. The “water bowl” is that orange bucket–it’s empty, and it’s not like she could even reach in anyway. No food in the pen and she won’t now come out of the shelter. Shivers like crazy.”

“The neighbors have been told that if an animal is kept outside longer than 30 minutes in freezing temperatures then Humane Law Enforcement officers can take action. And in fact, officers did take action in mid-December when Momma was found outside, and she was temporarily brought inside. Back then, it wasn’t freezing out. Now, they’re being told by HLE officers that they’re no longer investigating this property, while the temperature, with windchill, was 9 degrees Fahrenheit. As of Monday morning, the dog had been outside in below-freezing temperatures for more than 72 hours.

The neighbors continue to plead the dog’s case with city administrators and agencies, and emails were continuing to fly back and forth as of Sunday night between neighbors and representatives from the Mayor’s office.”

Read more →
More Stories
“Spotted this morning in the alley at 10th and U NW, with a rat in her talons.”“Love Trumps Hate Rainbow Bash to raise money for local non-profits” Thurs. Jan. 19th