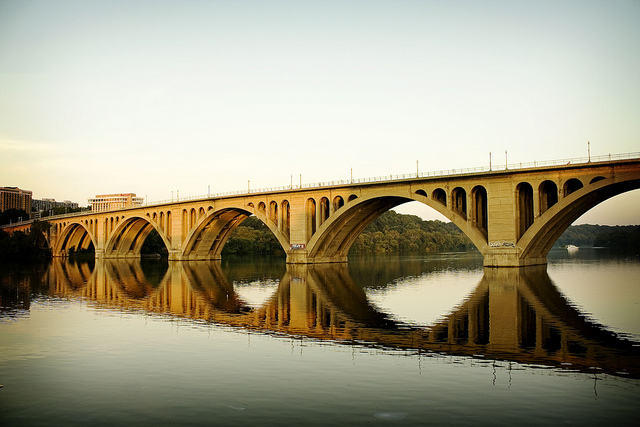 I wanted to share this feel good story because my confidence in local police (in Arlington) was just reaffirmed.

On Tuesday night I was driving to DC from the Rosslyn at 6:45 pm and was sitting in bumper to bumper traffic on Key Bridge. When the two lanes become three, the car behind me veered into the far left lane to prevent me from merging. He pulled his car up next to mine and proceeded to yell obscenities at me through our open windows (it was an unusually warm night). When the light finally changed he pulled ahead of me, scratching the front left side of my car. Traffic was horrible, so I was forced to sit behind him for another 10 minutes until we were able to turn left. During that time, he removed items from his car and threw them at my car. When we were finally able to turn onto M, I pulled off the road to avoid him any further (clearly he was not going to pull over to exchange insurance information).

When I got home, I completed an online aggressive driver report for Arlington County explaining the situation and sharing the license plate and car information, and expecting no response in return. This morning I received an email and call from an Arlington County Lieutenant who wanted to apologize for my experience, explained that the other driver had committed two felonies in hit and run and throwing items at my car, but that key bridge is officially DC jurisdiction and he could not pursue charges on my behalf.

The Lieutenant was so kind and sympathetic, and I was SO surprised to have received a call back from anyone! He encouraged me to report the incident with DC police. I wanted to share the story because I’m sure we have all observed aggressive driving in the area and felt helpless in doing anything about it. But there is an option (at least in Arlington) and others may know of the process in DC and other surrounding counties.”