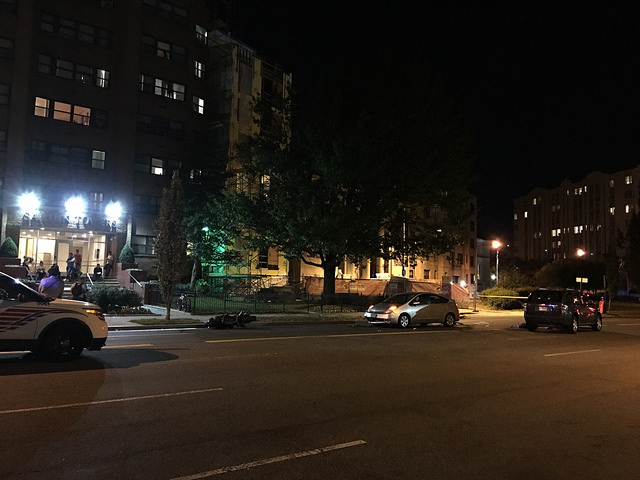 “I walked past at about 8:30 when 16th was entirely shut down between Irving and Park. There was an SUV, a Prius, and a motorcycle on the street — no people from the vehicles, though. SUV was headed north, Prius south, motorcycle near the southside curb. It didn’t look as if the cars had collided.

At the time, there were no investigators on the scene — just cops to shut the street down. But the road was cleared and fire trucks and ambulances (saw one of each) were getting through en route to other destinations. If it’s still shut now, it can’t be good. (It must have happened about 8 or so. I walk home from K street, and traffic was fine until I got to about the park when I started passing all of the busses. By Euclid, I passed the bus I didn’t get on at M street, and they were lined up to Irving.)”

“Cop told me it was a motorcycle crash.”

“Detectives from the Metropolitan Police Department’s (MPD) Major Crash Unit are investigating a traffic accident with injury that occurred on Thursday, October 13, 2016, at approximately 6:46 pm.

This case remains under investigation. The Metropolitan Police Department is asking anyone with information about this case to call the police at 202-727-9099. Additionally, anonymous information may be submitted to the departments TEXT TIP LINE by text messaging 50411.”