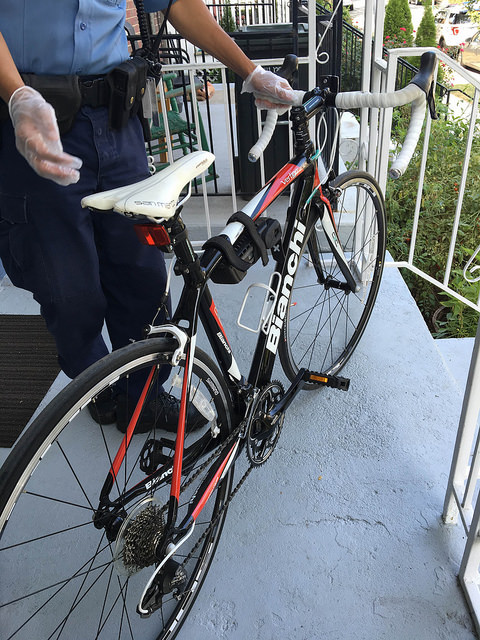 We woke on Saturday morning to find a very nice Bianchi bicycle left on our front porch in capitol hill. It was neither ours nor our neighbors, and best we can guess is that it was stolen and dropped off when the thief did not want it anymore. That, or left by someone at our house by mistake in the middle of the night??

Either way, I tried to do the right thing and reported it to the police. The officer who came to take the report took the bicycle to the M Street SE precinct. He did say, though, that if the owner did not call that particular precinct looking for the bike, he/she would probably never find it because there is no database of bikes that the police have or find. So, if anyone knows of someone looking for a missing Bianchi bicycle, please check with the M St. SE police station.”

Ed. Note: Not a comprehensive database but MPD posts some found/stolen bike photos from MPD’s Evidence Control Division that need to be claimed in 90 days before considered “abandoned”. You can see the current group of bikes being held here.