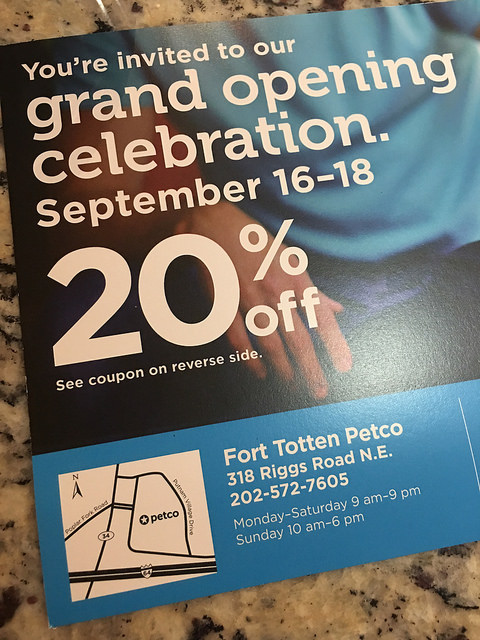 “Petco is opening near Fort Totten by the new-ish Walmart. The promotional postcard they sent out shows a map of Hurricane, WV though.”

We might as well take this opportunity to learn a little bit about Hurricane, West Virginia:

“Hurricane was named after Hurricane Creek, which was, in turn, named after a group of trees at the mouth of the river bent in one direction. A party of surveyors commissioned by George Washington noted the site appeared to have been struck by a hurricane,[9] giving rise to the name. Locals pronounce the town (HURR-i-KINN) not (HURR-i-CANE).[10] Less than 17 miles (27 km) southeast of Hurricane is a post office named Tornado.

Hurricane itself can be traced back to 1873, when a railroad track was laid through the town and a small depot was constructed. It was during this period that Main Street developed, and other businesses in the area. Hurricane was a trading and residential town for tobacco growers and other farmers in the early 1900s. The fire department was established March 2, 1936. It was incorporated as a town in 1888, and as a city in the 1970s.

In the early 1990s, the old depot, which once served as the catalyst for the town’s development, was torn down and replaced with a small gazebo. It was also during the 1990s that the city began to see a surge in urban growth as several subdivisions were established in the city limits. The population increase resulted in the widening of Route 34, a connecting road to Teays Valley, and an expansion of Hurricane High School.

In 2002, a winning multi-state Powerball ticket was sold at a convenience store in Teays Valley near the city of Hurricane. The winning ticketholder was Jack Whittaker. At the time it was the largest jackpot ever won by a single winning ticket in the history of American lottery.”