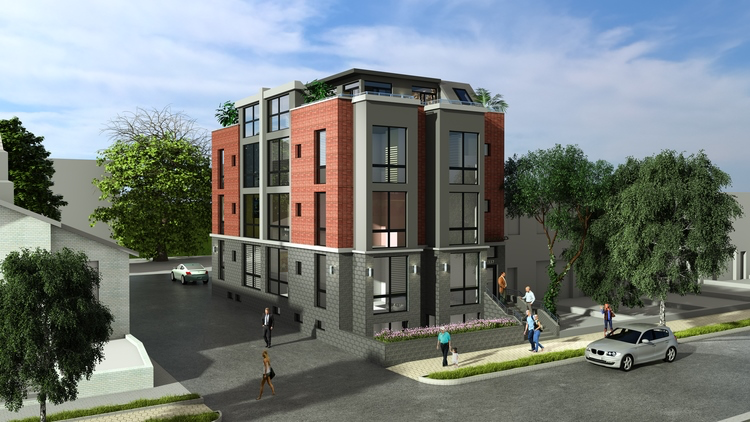 Stone Flats at 1337 K Street, SE and Stone Hill condos at 1345 K Street represent the eastward march of church-to-condo transformation as developers and home buyers seek out some of the city’s quieter established neighborhoods.

Presales have begun for Stone Flats’ ten luxury condominiums, ranging from highly functional one-bedroom homes to a one-of-a-kind penthouse loft with a private sun deck and monumental city views. Residents are expected to start moving in this fall. At the same time, Pecar has started site work for Stone Hill, an adjacent 36-unit condominium building scheduled to deliver in Fall 2017, on the site of the former Mount Paran Baptist Church.

This new community is situated in a pocket of new condominium complexes just south of the new Atlas District and the H Street Corridor, and directly east of Barracks Row and Eastern Market. “I was attracted to this neighborhood because it offers an ideal location on Capitol Hill,” said developer Gene Pecar. “It offers immediate access to Metrorail, Harris Teeter, and major highways. At the same time, our site is on a quiet residential street a block and a half from Pennsylvania Avenue, creating a very comfortable environment for condominium ownership. Given the development pipeline, this is an area where buyers’ investments can realize genuine upside.”

One-bedroom units at Stone Flats are priced from the high $300,000s; two-bedrooms begin in the mid-$600,000s. For sales information, visit http://www.stoneflatsdc.com/.

Stone Flats’ residents will enjoy easy access to historic Eastern Market and Barracks Row, home to such wildly popular restaurants as Rose’s Luxury, named Bon Appetit’s Best New Restaurant in the US in 2014, along with its new and already highly acclaimed sister destination Pineapple and Pearls. And those are just two of the numerous restaurants lining 8th Street south of Eastern Market, including Ted’s Bulletin, Ambar, Cava Mezze, Garrison, Lavagna, and Matchbox.

After developing condominiums in the Shaw/Truxton Circle and Capitol Hill neighborhoods, Pecar acquired the Mount Paran Baptist Church and several adjacent properties from 2013 through 2015. Founded in 1917 in southwest Washington, the church has moved to a new and larger home in Clinton, MD.”