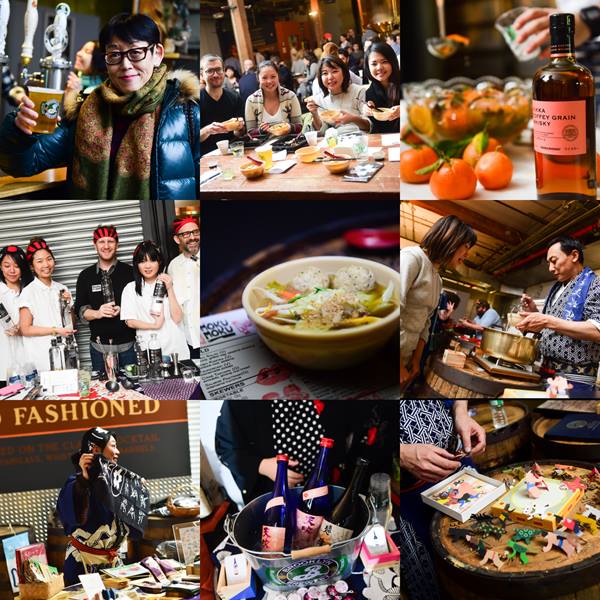 “SUMO STEW (#SUMOSTEW) takes its show on the road for it’s ninth round, to be held in Washington, DC, at Right Proper Brewery’s Production House + Tasting Room in Brookland (920 Girard St NE). Inspired by a trip to Japan, photographer Michael Harlan Turkell (harlanturk.com) returned to Brooklyn, NY with aspirations of importing this ancient sport, and teamed up with Harry Rosenblum, owner of The Brooklyn Kitchen (thebrooklynkitchen.com), a wonderfully multi-faceted cooking store and center for culinary education. The two created a series based around plentiful bowls of chankonabe, the “sumo stew” wrestlers prepare and eat before matches. The hearty broth is loaded with fortifying protein and vegetables. This, paired with a live stream from Japan of the bimonthly grand tournaments, makes for a lively event, which brings hungry first time and long-standing sumo fans ringside.

This round of SUMO STEW will feature a miso sesame dashi based chankonabe with tsukune (chicken and pork meatballs), shrimp, salmon, Napa cabbage, and mushrooms, made by Chef Yo Matsuzaki of Zentan, (zentanrestaurant.com) in the Kimpton Donovan Hotel.

Every guest will also get a special bento box, composed of Japanese-inspired dishes from top local restaurants, including (subject to change):

Our hosts, Right Proper Brewing Company is a small, community focused brewery committed to producing soulful, balanced beers for our neighbors in Washington, D.C.  Their Brookland Tasting Room & Production house offers a view of the brewery in a cozy space filled with reclaimed cherry wood and a slightly disturbing chalk art mural, where you can sample their latest offerings of soulful, balanced ales through flights, glasses or growlers to go. www.rightproperbrewery.com

Nikka Whisky, the outstanding distillery that set off the Japanese whisky movement when founded by Masataka Taketsuru in 1934, will be served as mizuwari (“mixed with water”), a popular way whisky is enjoyed in Japan. www.nikka.com

Also pouring will be Mizu (mizushochu.com), a producer of Japanese shochu in Arita, Japan. Made from fermented barley and black koji, the refreshingly smooth 70-proof spirit, will be served straight or on ice with a slice of cucumber. mizushochu.com

And if that’s not enough, we’ll have a special dessert from Buttercream Bakeshop. buttercreamdc.com

**The $50 ticket grants each participant a bento box, bowl of chankonabe, a beer ticket, and two drink tickest to be used for a taste of sake, shochu or whisky – and round after round of sumo. (Additional drinks will be available for purchase.)

***A portion of the proceeds will be donated towards the Japan Earthquake Relief Fund, helping those affected by the 2016 Kumamoto earthquakes.”