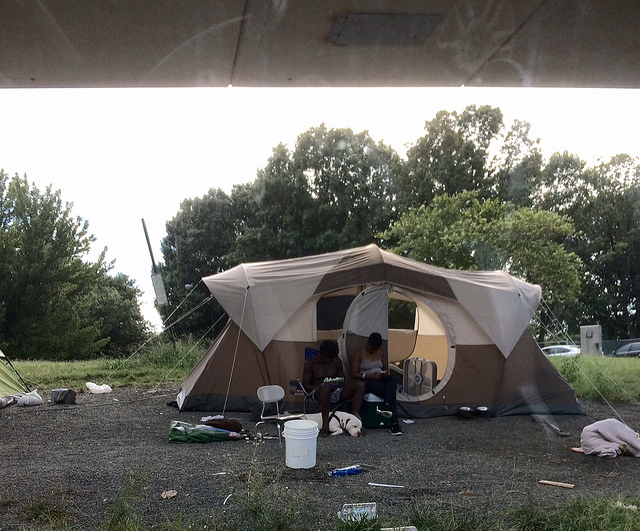 Off of 27th Street, where there tends to be a large congregation of homeless individuals — near the Kennedy Center/Rock Creek Parkway — I saw two dogs and a sign that said “puppies for sale” and “need $$ for puppy supplies.” I didn’t see any puppies and the two adult dogs looked healthy, were playing, and there was a large bag of food…. it made me sad to see the dogs, but I thought I could just drop extra food or dog supplies off as opposed to just giving cash. When I drove by again today, I did see a small plastic kid’s pool full of puppies and no adult dogs in sight. The puppies couldn’t have been older than 2-4 weeks. There was a bag of puppy food, but I think they looked too young for that — they should be feeding off their mother or from a bottle.

I called Animal Control and they said it had already been reported, and they had sent someone out. I could call the responsible agency if I wanted to follow up. I’ve emailed my vet, as well as the rescue organization that I got my dog through, but I thought I’d reach out here as well.”

“I’m not sure what to make of this. This is part of the tent city near the watergate and the overpass from the white Hearst freeway. The couple set up home on their veranda while checking their iPhones. In front, not in pictures they were selling puppies from the dog that is under their seat.”