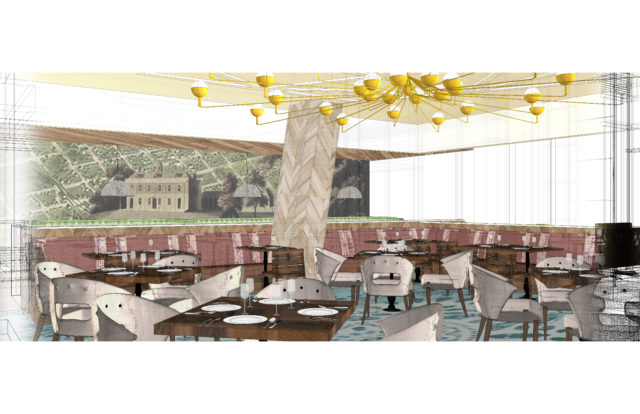 “Farmers Restaurant Group introduces the newest addition to their collection of farmer-owned restaurants, Farmers & Distillers, at 600 Massachusetts Avenue. The restaurant is targeted to open in November of 2016.

Farmers & Distillers embodies the true enterprising spirit of the original founding father, George Washington. His collaborative nature and keen eye for opportunity brought together an entire country, and also made him an entrepreneur ahead of his time. He experimented with progressive farming techniques at his Mount Vernon estate, and established what became the largest distillery in America at the turn of the 18th century.

In celebration of George Washington and the nation’s capital both then and now, the Farmers & Distillers menu showcases cuisines from a variety of influences found all around DC. There is inspiration from neighboring Chinatown with hand-pulled noodles, shaobing (Chinese flatbread) and farmers-style dumplings. You’ll find crispy pork schnitzel recalling the original German immigrants working on DC’s east side; GW loved European cooking techniques, which are being utilized in dishes like Pot au Feu (slow cooked short rib) and Bouillabaisse. Every decision was pulled through the filter of “What would George do?” be it with flavor, plate ware, cooking technique, or design.

“I’m crazy excited for Farmers & Distillers; creating an entirely new concept and ensuring it grows from our original farmer-owned DNA is both challenging and inspiring,” said owner, Dan Simons. “We set the highest bar for ourselves that we could imagine, and our team is absolutely crushing it with the details of bringing the idea to life.”

Guests will enjoy their experience in the 12,000 square foot space, designed by the GrizForm Design Architects team that also designed Founding Farmers Tysons and Farmers Fishers Bakers in Georgetown. Designed to meet LEED Gold Certification standards, the restaurant has been organized with stylistic representations of rooms and microclimates inspired by the spirit of George Washington, who would seize every opportunity to make each space spectacular by modern day standards.

“Mt. Vernon Square gave us the ultimate location for our George Washington inspired restaurant and distillery,” said Simons. “As a unique sibling to Founding Farmers and Farmers Fishers Bakers, we’ve created an entirely new food and drink menu, and a never before seen design.”

The restaurant has captured Washington’s love of entertaining and created different areas of the restaurant to attract every type of guest. From the barn room – a quiet, intimate space inspired by the flow and twinkle of a barn bathed in candlelight – to the pleasure garden, an energetic space adjacent to the bar with beautiful botanical installations suspended from the ceiling.

Below the dining room on the concourse level is the kitchen, as well as the slightly tucked away 16-seat private dining room called The General’s Parlor. The General’s Parlor will offer special menus, a built in wet bar available for guests that would like cocktails made to order, IT equipment for business meetings, and more. This room is available by reservation only.

Farmers & Distillers will also have an on-site distillery, just as GW did at his Mt. Vernon home. The distillery is named Founding Spirits, and while this is a new adventure for the Farmers Restaurant Group team, they have an excellent partner and mentor along for the journey, Rick Wasmund, of Copper Fox Distillery in Sperryville, VA.

The bar program is led by FRG Beverage Director Jon Arroyo, and will showcase house-made spirits, as well as Founding Farmers’ proprietary line of Rye Whisky and Gin, FRG proprietary wines from vineyards in Virginia and New York, and 12 beer taps that will feature only DC, Maryland and Virginia brewed beers. True to the Farmers Restaurant Group brand, the cocktails and non-alcoholic beverages will include fresh house-made syrups, elixirs and bitters.